Skip to content
We talk to the guitarist for the Foo Fighters about his country renaissance.

“You know, Dwight Yoakam said something really cool. I was interviewing him at his office, at his headquarters. And on the walls were all his gold and platinum discs from over the years.” A dog whimpers off in the distance as Chris Shiflett takes a moment to recollect the contents of the honky tonk legend’s brilliance. He’s calling from the comforts of his home dining room in Los Angeles.

As the host of the country-centric podcast Walking the Floor, its understandable Shiflett would need to gather his thoughts. He’s shared many a moment (or 79 episodes’ worth as of our conversation) with what seems like any and all movers and shakers within the country scene. We’re talking Merle, Sturgill, Dave Cobb (we’ll get to that in a minute), Lucinda Williams, and virtually everyone in between (though he’s still working on securing a sit down with Margo). But back to the Yoakam story.

“[Yoakam] was talking about – I don’t remember specifically what – he just sort of turned and pointed to all of his platinum records and said “You know, I can look back and go ‘I wrote eight out of ten songs on each one of these records.’” And I just thought, ‘Fuck, that’s amazing.’ How cool.”

For someone as engrained within the annals of popular music of the 90s and 2000s, its surprising to hear Shiflett so enthusiastic about his anecdotal Yoakam story, although, especially considering the fact there are plenty of other stories like the Yoakam one. But before we dive into any more of Shiflett’s legendary country interactions, it might serve us best to look into his journey to date. In observing Shiflett’s body of work, there’s the obvious marquee of Foo Fighters, however that serves zero purpose with regard to Shiflett’s country music career, outside of the fact that Foo Fighter down time means Chris Shiflett country show time.

So there, we’ve acknowledged that Shiflett is a member of Foo Fighters, but that’s all we’ll bother with that from this point on. Chris Shiflett is a tried and true southern California dude. He grew up playing listening to rock n roll, punk music and the like but it wasn’t until he was somewhere in his late teens that he found himself gravitating to country.

His admission to his later-to-the-country-party status provides a moment of self-deprecation during our conversation.

“You know, I liked rockabilly and stuff like that and music that had a little bit of that flavor in it and then you know when I was in my late teens or whatever, I bought like a Patsy Cline record and a Johnny Cash at Sun Records. Just kind of the obvious stuff that everyone first gets exposed to. And then, you know, there was like Uncle Tupelo, and Old 97s, and Sun Volt, and Wilco, and Whiskey Town, and that whole era of bands really got me into it, and then I think I just sort of kept peeling it back from there.”

Despite his late arrival to embracing country music wholeheartedly, Shiflett has managed to engrain himself within the scene in a pretty integral way. The aforementioned Walking the Floor podcast and his time spent as a member of The Dead Peasants have certainly solidified Shiflett’s unique standing in country music, but even still, the past decade’s worth of country-centric work somehow comes into question.

“It is a funny thing because I’m known – if anyone knows me, or who I am, its probably because they know me from the Foo Fighters – right? From a rock n roll band. So I get asked the question all the time – people will just say like “Well, why do you like country music?” – and its like “I don’t know!” [laughs] Why do you like a ham sandwich? You just like what you like anyway. You know, you can’t really choose the things that sort of just hit you in the gut. You just got to go with it.”

Nevertheless, not all of Shiflett’s efforts to ingratiate himself into the world of country music were for not. In a total cold call move, Shiflett reached out to Nashville demigod and RCA Studio A savior Dave Cobb. Originally intending to interview the inimitable producer, Shiflett found himself pining to record with Cobb as well.

“So we did the interview out there in the big room in Studio A, and I had never really met him before. I just cold called him to see if I could interview him, and I was a huge fan of his work. I love a ton of the records that he’s made over the years, so sitting there in that room –its cool, the room’s amazing – and I loved his work. So when I left – I remember getting in the car and saying to my friend who was with me, “I got to make a record with that guy. I’ve got to make that happen.”

Rather than sitting back and reveling in his interview with Cobb and daydreaming about recording, Shiflett took it upon himself to set his album West Coast Town into motion.

“I called him and I just said “Hey man, I want to make a record. Would you be interested I producing it?” And it worked out that he had some time that had just opened up in his schedule, and that was that. We booked it, and really that was when I had to go and sit down and really finish my songs. I just went out and woodshedded it for a couple of months and got my songs in as good a place as I felt that I could get them. And then I turned them over to him.” 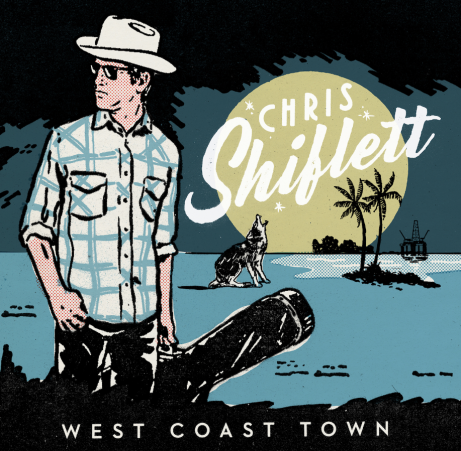 Just as Shiflett had envisioned, Cobb’s Midas touch extended his demos and challenged his perception and approach to virtually all the songs he had written with some additional help on four songs from long time friend (and tour mate) Brian Whelan. In a nutshell it was everything Shiflett had hoped for and more.

“His instincts are so good, and when he gets going, he’s just moving fast and he’s just reacting to what’s happening in the moment. It was great, it was really what I kind of wanted to do. I wanted to have the experience of having him produce the record. So I just went into it totally open and just went into it with whatever he suggested, and his suggestions were fantastic. I mean some of the songs really kind of radically changed from what they were when I originally brought them in there. And definitely all for the better.”

It seems as though Shiflett is yet another disciple of the Cobb collective – and with good reason – as the singles for West Coast Town – “West Coast Town” and “Sticks and Stones” – have managed to bring out an idealized late 90s honky tonk sound. To Shiflett, the singles were a long time – we’re talking nearly nine months’ worth – coming.

“I’ve had the album sitting in my back pocket since last July or something, to me it feels like these songs have been around for a while and I almost have to remind myself that when we’re playing live nobody has heard them. Unless they’ve heard the couple of songs we put up on Spotify in the past couple of months. So that’s it, so the rest of it is like nobody has heard of these tunes. And we’re mostly playing the new record in its entirety and then sprinkling in a few covers. That’s pretty much what we’re doing at these shows.”

Luckily for Shiflett, his touring has become more substantial since we spoke, and for the time being, he’ll have plenty of time to get the songs out in front of people leading up to and after West Coast Town drops.

“Its been going well, and people seem to have a good time and everything, but I’m kind of curious now when I’m doing shows after the record comes out.”

Its probably safe to assume the Cobb connection, Shiflett’s leg work on Walking the Floor, and general amiability within the country realm will serve West Coast Town well upon the album’s release. Granted, he won’t be able to tour in support of the record and Chris Shiflett the country artist full-time thanks to some other non-country obligations, but that doesn’t mean he’s looking toward setting up future dates.

“If you have any ins with great big artists that need a support act, you just let them know, I’m available.”

I’d say its safe to assume he’d have no problem earning such a position on the merits of his own country connections (though the gesture is appreciated, no matter how absurd).