Skip to content
John Moreland returns to Nashville this Friday at the Basement East to play a show you can't miss, and he shares a few of his favorite things about Nashville with us.

I continue to wonder why we interrogate sadness much more than we do joy. Someone says they feel sorrow, and an inquiry follows. Someone says they feel happiness, and only a polite smile replies. The two emotions are equidistant from a center stasis, simply mirrored on opposite sides of the emotional axis, and yet, sadness is more often called into question. It’s as if a person who knows happiness can’t have grief swirling in their blood at the same time. As if a person who loves without pause is incapable of exhaling a breath of hate. As if a person who faithfully understands doesn’t slip in judgment on occasion. It’s as if a man who grew up playing in punk and hardcore bands couldn’t write a song like “You Don’t Care Enough for Me to Cry.” But that man did, and his name is John Moreland. 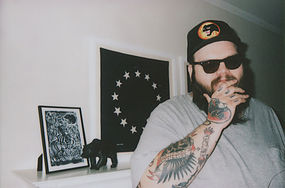 He is the howler of all the juxtapositions and undefined emotions we can’t put into words ourselves, and whether or not it can be explained, there is something alluring, something tragically magnetic about heartache. It’s what makes his music so attractive. When we filmed our UnLocked Session with John, I don’t think he said more than a couple of words, but when he sang his two songs, I heard every word I could have asked to hear from him. Gripping a Martin in a tattooed hold, he strummed his unshakeable “Hang Me in the Tulsa County Stars,” and his intoxicating voice made addicts of all of us listening, if we weren’t already before. He’s commanding in his subtleties and louder when unplugged, but maybe it’s because in his acoustic existence he’s impossible to ignore. His third album, High on Tulsa Heat, is inescapable and horrifically beautiful, and his search for home is never met with findings. The ten songs bleed into each other, continuing unrelated narrations in a way that makes a collection of short stories seem like a novel told in rawness and through uninhibited production. There are a couple of slight spirit-lifters, if only for their tempo, like “Heart’s Too Heavy” and “Losing Sleep Tonight,” but the majority of the album is spent in a more cavernous space.  “Cleveland County Blues” grapples with reality, “covered in fiction, chasing something true,” and “Cherokee” discloses a forlorn confession. And in songs like “Losing Sleep Tonight” and “American Flags in Black & White,” he uses contrasting elements and emotions to describe his sentiment. These comparisons are why I listen to John Moreland. We are creatures that wax and wane, our only consistency being that we are inconsistent, and in these variations, we live. We never know how lost we are until at home, and we never know what pure happiness is until we’ve lived in shadows. Light is only defined because darkness is known, and they both dwell in us, certainly in John. He just does a real good job of singing about the lightless and lonesome days. After all, he’s “so damn good at sorrow.”

John Moreland is our favorite part of the city on the nights he inhabits this town, and he’s shared with us his favorite things about Nashville below. He might not call this city home, but make him feel that way Friday night, July 29, at the Basement East.

Where I usually stay in Nashville. Joey (from the band, Glossary) and his wife, Jolene, are wonderful people. We shoot the shit and listen to records and share new songs we’ve been working on.

2. The gas station by Fond Object that sells individual cans of LaCroix

Why don’t more gas stations do this?

One of my favorite hardcore bands. Based in Portland, OR now, but they formed in Nashville.

Friendly dudes. Oil changes are important in my life.