It was a Dawes day in Nashville.

Twitter is a nice place sometimes. On Wednesday, Emily, Cameron and I were busy filming at LS headquarters with The So So Glos, and we wanted to find a willing soul at the Dawes in-store to give us a recap of the festivities. Solution? Take to Twitter. Normally, I have some disdain for Twitter: I am routinely yelled at for not being “proactive” enough on our social media sites, and our daily hits far outnumber our social media stats. My response: I’d rather spend time on good content than pandering to new Twitter followers. I digress. But on Wednesday, we found Katherine Brock through the wonders of a 140-charachter search. I wrote a recent cover story on the Dawes boys for American Songwriter; we spent some time in Asheville, NC eating eggs Benedict, talking about music and recording a track from their new LP, Stories Don’t End (them, not me, clearly). They’re currently doing a tour of independent record stores, which will feed into dates with Bob Dylan (holy shit!) and then headlining & festival gigs (including a stop at the Ryman with Shovels & Rope on 6.9, on sale today at 10:00 a.m. local time). They also recently traveled to Rwanda with the United Nations Foundation’s Nothing But Nets campaign to help fight malaria, installing mosquito nets, visiting impacted communities and playing music. My brother works at the World Health Organization in Geneva (specifically for UNITAID, which raises money through innovative financing to shape markets for HIV/AIDS, tuberculosis and malaria in low-income countries) so this is a cause near and dear to us. Good work, boys. Here are a few of those photos. 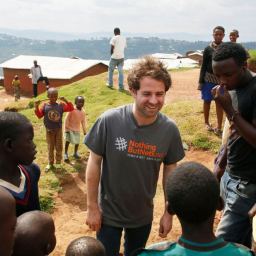 The album drops 4.9, and till then, here’s Katherine’s take on the Wednesday Dawes in-store at Grimey’s Too. Follow her on Twitter at @kathrinebrock.

I’ve been to a handful of in-stores at Grimey’s and I always get really excited about them…until I walk in and remember how small it is. Luckily the Dawes performance was in Grimey’s Too, a new addition that I had yet to venture in. I arrived about 15 minutes before the scheduled time and shivered in a long line outside with a friend. A staff member quickly went through the line, checking people off and handing them their posters as they walked in the store.

Once we got in we saw that it was packed. We were all in the same room, without racks of CD’s to block us, but you could barely see around the crowd of people. A few minutes after we all crammed inside, Dawes took the stage errr floor for a stripped down set. Taylor thanked the crowd for coming coming out and the band launched into “From A Window Seat.” After the first single, the crowd was treated to 4 other new songs, a cover, and 2 older standards (set list below). There was a minimal amount of talking in between songs. Taylor expressed their shock when they found out they were headlining the Ryman. They also talked a little about doing this stripped down promotional tour for the album and how much fun they thought it was going to be, even without the organ. It was clear though that they were there to play. I was surprised at how long their set lasted, I went in fully expecting to hear 3-4 songs and then be shuffled out. Thankfully that was not the case.

Once the show ended, an announcement was made that there would be a meet & greet / signing with the band momentarily. Everyone lined up to get their posters signed and exchange a few words (mostly just thanks) with the band. Fans in attendance were also instructed to fill out a form to win tickets to their Ryman show w/ Shovels & Rope (June 9th). I did all of those things and then left, pretty satisfied with the whole experience. I did however, resist the urge to ask them about the dog in their press photos, like… why wasn’t he on the promo tour with them?

Set List:
From A Window Seat
Just My Luck
Someone Will
Time Spent in Los Angeles
Something In Common
Most People
Hey Lover (Blake Mills cover)
A Little Bit of Everything

Take a listen to a session Dawes also filmed with Lightning 100 while in town :::