Skip to content
How do we ditch the modifiers and really change the conversion?

“But we write about female musicians ALL the time.”

That statement is the most frequent response I get when I challenge a music journalist or blogger to do better when they write about women. Here is the usual pattern: an article is written, I point out some language that is troublesome, and “but I write about women!” is what I hear in return. I’m not going to call out anyone here in particular, because this isn’t about them, it’s about us – and I do assume many of them have good intentions in the long run, and mean well, mansplaining/hero complexes aside. But “meaning well” doesn’t get us far enough, and we all can learn, listen, and do better. Let me say upfront, I am sure there are times I’ve been a guilty party. And I am sure there are exceptions to every rule. If it makes you feel better to find these instances, go ahead. Instead, I urge us to look forward and inch towards change. (Note: as we’re in Nashville, much of this piece is going to focus on country music, but these themes are universal across genre.)

Truth is, we still often fail when we talk about female musicians. How many times have you seen a woman who is a songwriter – Natalie Hemby, for example – referred to as a “female songwriter”? Often, if you pay attention. How many lists of “Best New Women in Country Music” have you seen? While both of those might seem slightly innocuous on the surface, you’d never see the same applied to men, and therefore both ways of talking about or categorizing women are more of a problem than a solution.

“It is frustrating that everything we create is still 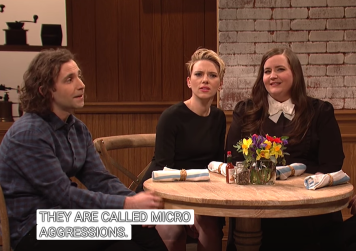 discussed first as being a female thing as if it is a deviate of the norm, the male version,” says Caroline Spence, who just released the terrific album Spades and Roses and is – gasp! – a woman and also in music. “Every article starts out with her gender and age in the first couple of sentences, His might just say he is from Texas. So even if our art is just as good as the male equivalent, having been labeled first as female, we are still at some sort of weird disadvantage having been stuck with the connotations of our gender and our gender at a particular age. After mulling over this issue for a long time, I finally found a way to put it to music. My new record has a song on it called ‘Softball.‘ I came from the fact that when I was little I wanted to play baseball and was told I never could but would have to play this sport that was basically the same but for girls. There is a line in the song that says ‘even when you’re stealing the base, they are still gunna call it softball.’ The play on this is that you can’t steal bases, in the traditional sense, that you can in baseball. My point is twofold; first, that men and women operate under different framework and rules even when performing the same tasks and secondly, that even when women are doing the same things as men there is a different language for what they do.” This kind of thought has long plagued women who are songwriters: singing about relationships and heartbreak makes them confessional or sad and whiney, while men who sing about the same things are brazen and brave.

“I think my main issue with the rhetoric around how music journalists can sometimes write about women is that it seems as though the baseline assumption is that a human musician is a white male,” adds Michaela Anne, whose most recent album is Bright Lights and Fame. “So anything other than that requires all of these qualifiers. Whether that is gender, race, body type, etc. So for this conversation being about gender, then there are all the qualifiers that come with the assumptions around the feminine.”

One of the most upsetting recent patterns has been the obsession to pit women who make independent country music against each other – as in, there can only be one. Is it Margo Price? Is it Nikki Lane? Michaela? Is it Kelsey Waldon? Is it Aubrie Sellers? This battle is ridiculous – imagine if we put men to this same standard. This article about Kelsey Waldon’s I’ve Got a Way is one of the absolute worst perpetrators (ok, so I might call out a few offenders by name). This is how the article begins:

The article argues that while Kelsey’s album is good – great, I think – it simply cannot compete in a space taken up by another woman. Do we hear that same reasoning ever applied to Sturgill Simpson, Chris Stapleton, Jamey Johnson, Cody Jinks, Jason Isbell, Cale Tyson, Andrew Combs? No. Those men don’t sound like each other, and neither do Kelsey and Margo. It’s an insult not just to women, but to art.

“Woman,” most often, should be a noun. Not an adjective. Natalie Hemby is not a “female songwriter,” just as St. Vincent is not a “female guitarist” and Meg White is not a “female drummer.” If you wouldn’t say “male guitarist,” then don’t say “female guitarist.” Often by doing this, you are implying the very dreaded “she’s good…for a girl” chain of thought that needs to be erased now in order to birth an equal playing field. “Including ‘female’ in front of our job description is differentiating us from our male counterparts, when we are doing the exact same thing as them, if not doing it better,” says Spence. It’s often not overt sexism here (though that happens!), but something different. For one, we’re tagging “songwriter” with a modifier. Female songwriter. As in, different from “male songwriters.”  This isn’t a matter of quantity – writing more articles about women musicians is a great thing, as is approaching it academically – but doing so is not an antidote in and of itself, and language matters. If we’re going to call Natalie Hemby a female songwriter, then let’s do the same for men. But we never would – “male songwriter” would sound ridiculous when used in the same capacity we allow for women.

“Woman” is not a genre. “It’s not a genre, it’s a gender,” Margo Price has said. She’s damn right. Women shouldn’t be categorized with other women because of how they were born or chose to identify. You would not put Kanye’s record in the same category as Luke Bryan just because they are both men, but I have seen women who are country artists on the same list as a woman rapper – simply because they are the same gender. Prime example: this list from GQ of “9 Rising Female Artists You Should Know This Fall.” Jillian Mapes did an excellent job tackling this for Flavorwire, with “Woman” Is Not a Genre: Why the New, Female-Led Rock Revolution Is for Everybody.” And for the love of all that is holy, can we not find just ONE other way to talk about these amazing records from Courtney Marie Andrews, Amanda Shires and Star Anna except for in relation to men?

Think carefully about making a list of the “best women.” Top female guitarists. Hottest new women-fronted bands. Just don’t do it. Like when Gibson tagged their list of female guitarists “Guitar Gals.” Or “18 Women In Electronic Music You Need To Hear Right Now,” from Buzzfeed. One country blog likes to have “Women In Country Wednesdays.” Appreciate the gesture, but how about you just write about women on all the days – because giving women their own segregated lists ensures they are kept that way. Exception to this rule: International Women’s Day or any specific day where there is a dedicated reason to celebrate women for just being women, or a women’s magazine – Elle doing a music issue, for example, is a platform that makes sense.

Don’t tell women when and how they can be sexual. Often I’ll see mock outrage in response to a sultry magazine cover, or a writer/blogger lambasting women for speaking out about the problem of how we represent women in music but then choosing to wear a dress or sexually-charged outfit. Unless a woman is being forced, she has every right to both be a sexual being but also be considered completely independent from it.

Do not use the word “songstress.” Nikki Lane is a SINGER, not a songstress.

Do not only compare women to each other. Why do we allow 7,000 truck-song singing men, but limit ourselves to only one or two “outlaw” women? “I always notice how in certain genres, it never feels like men are compared/contrasted to each other and never the sentiment that there’s only enough room for 1 or 2,” says Michaela Anne. “I’ve literally had journalists say to me, ‘oh I really wanted to write about your record but I had JUST written about (enter name of a female indie country/Americana artist).’ And they say it to me so matter of fact like I should know perfectly well that that means they couldn’t write about another female so soon.”

Don’t assume that a woman is flirting with you. Jake Tapper – yes, CNN’s Jake Tapper – once wrote this hilarious article for McSweeney’s about this phenomenon.

Are you giving men different permission than women? For example, Alanna Quinn-Broadus of Alanna Royale finds that too much attention is paid to whether or not she curses on stage, something not applied to her male counterparts. “The fascination with my cursing on stage is baffling and I can only imagine it comes from my being a woman,” she says. “Nobody calls Dave Grohl or Lil Wayne foul-mouthed. Why the fuck do you think that is?”

Think about ageism. “I’m always struck by the collective surprise that is often expressed when a woman is ‘gaining her success’ at an ‘older age’ and how age is often highlighted much more than with male musicians,” says Michaela Anne. “I remember a couple years ago, a male producer friend of mine was in the press about something and the journalist mentioned his age, 40, and called him a young producer. That same year there was a female country artist having her breakout year and so many pieces of press were highlighting the fact that she was ‘older’ at 37. I can’t help but think you’d be hard pressed to hear a 40 year old female musician being referred to as young.”

Lastly, if we point out problematic language or systemic sexism, we are not always calling you sexist. This isn’t about you. For once, this is about women. So listen.