Dylan LeBlanc is stopping by The Basement on December 1st in support of his sublime 2016 release 'Cautionary Tale.' Its been an arduous journey, but the album and road to it have helped shape a new perspective for the Louisiana songwriter that'll undoubtedly serve him for years to come.

The last Lockeland saw of Dylan LeBlanc was when the cool cooing man from South Louisianne was taking everyone on The Farm to church. Toiling away in head to toe denim on the modestly sized Who Stage, LeBlanc managed to captivate the famously distracted Bonnaroo crowd into hearing his Cautionary Tale on life, love, and everything in between.

Since LeBlanc’s sultry, borderline oppressively hot Bonnaroo set, he’s spent the better part of 2016 as a road dog of the highest order, touring in heavy support of the aforementioned Cautionary Tale. “I mean, its been a good year for me as far as shows are concerned, because it’s the first year that I’ve put a record out and had actual people come to my shows – like when I’m headlining and that. So that’s been pretty cool. Its not like we’re selling out clubs or anything, but we’re bringing people into the rooms.” LeBlanc’s perspective seems to be one of utter and complete gratitude with regard to his year to date, and there’s plenty of reason for the Layfayette, Louisiana bard.
LeBlanc’s third LP and first with Single Lock Records, Cautionary Tale marks the first Dylan LeBlanc record to get a proper stateside release. “It’s the first record I’ve ever released in America – I’ve never been on an American label. Its been spread across, more widespread in my own country, which means more people are coming to see me in my own country, which has never happened before.”

The circumstances of how Cautionary Tale went on to become LeBlanc’s first American release in his brief, but storied tenure as a performer is one of intrigue, as the album seemed to come together out of wholly fortuitous circumstance – a contract with UK-based Rough Trade Records coming to a close, and John Paul White and Single Lock Records helping preserve and ultimately finish what would become Cautionary Tale.

“I had a two record deal with Rough Trade Records, and my third was just an option that
they had, and I told John Paul [White] and them that I wanted to make the record with them. I didn’t have any money to make a record, I didn’t have any way to make a record, and they were like ‘Look, if you’ll make the record with us, we’ll help you shop it to Rough Trade, and if they don’t want it, we’ll take it.’ So it kind of just happened naturally.”

Minus the headache of fulfilling contract engagements and UK-first releases, LeBlanc was able to approach Cautionary Tale from a place of comfort and discomfort, simultaneously. Where songs may have been slightly more farcical in the past, or perhaps a little hastily produced, LeBlanc, White, and co. were able to take time to examine both the songs and LeBlanc himself.

“I just had never written about subject matters like that before. I was trying to go through a change – most of my life, its just been me fucking up. I started this thing in my early 20s, and now I’m in my mid to late 20s with two records. I just felt like I was a fucking mess all the time – in some kind of trouble, drinking too much, losing friends because I was a dickhead because I drank too much whiskey.”

But as LeBlanc has been able to spend more time with the album – writing, recording, releasing, and touring in support of it – he’s managed to better understand what exactly has shifted within himself via the music and such, though the early stages may not have necessarily been the easiest of approaches.

In fact, LeBlanc admits that he took a distinctly different approach, looking deep within his own experiences for the first time before sitting down to write, “You know, I always think that the best way to get through anything is to face it totally, head on. Which is hard to do, and is a painful process – which is why most people don’t even do it.” And so LeBlanc took Cautionary Tale head on, which might seem like an innocuous task, but that was easier said than done in LeBlanc’s case.

“I was facing a lot of things that I couldn’t help but face, because I had alienated myself from a lot of people and fucked a bunch of stuff up, and I didn’t want to do that any more. I don’t know, I think that I was living it and accepting it, and accepting what I didn’t want to be – it was more about being as present as I could be, in that you are detaching yourself from the past, and you’re detaching yourself from the future. You’re just staying completely in the present. So that’s basically where I was at, at the time.”

While Cautionary Tale has certainly rooted LeBlanc’s distinctive timbre and newfound perspective in a major way, LeBlanc is sure to point out that much like it has been during the process of bringing Cautionary Tale to light, his perspective is still changing. Where LeBlanc describes Cautionary Tale as a “slow record” in both its path to existence and tonally, LeBlanc has already expressed a desire to maintain that LP4 packs a little more “punch.”

“I’m trying to write more upbeat songs and some songs that rock a little bit harder and are going to translate really well live. And I think that its time for me to do that. I’ve done this tempo for a long time, and I think – the band I have right now is so rock n roll – I want to make it vibey – like Cautionary Tale is vibey, but still edgier like rock and more electric guitar.”

So while the “vibey” sounds of Cautionary Tale are more than expected on LeBlanc’s year-end run of tour dates, don’t be surprised if something slightly more audacious (even bodacious) starts to creep through the winsome sounds of LeBlanc and his band, as there are inevitably good things on the horizon. Hell, who knows? If you come out to LeBlanc’s Nashville stop at The Basement on December 1st, you might even hear a little bit of John Lennon’s “How Do You Sleep?”

Speaking of LeBlanc’s Nashville stop, his Nashville stop-over will be the first of what will undoubtedly become a recurrent theme – LeBlanc in Nashville. He’s always had a distinct admiration for our famously mercurial town, and relishes the thought of becoming a more prevalent figure in town. 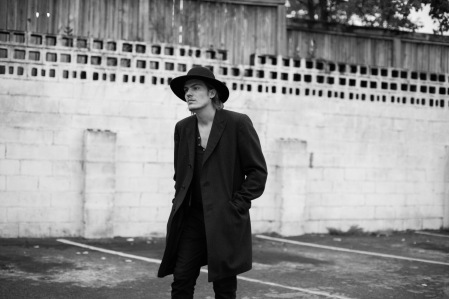 “I love Nashville, and I love what they do, and what all my friends in bands in Nashville. I’m not sure if I’m one of those people – I would love for [Nashville] to lay claim to me, that would be great. It still feels like its too early to tell whether or not that’s going to happen, but I do love Nashville. And it would make me very happen if it did happen, but if it doesn’t happen, I think I’ll be okay.”

But at the same time, having developed a more substantial perspective on his life as a musician and entertainer, LeBlanc maintains a healthy perspective on rolling through Nashville. “As long as I can get people out to shows in Nashville, I should be good. Nashville’s a cool place, dude, there’s a nice underground going on right now.”

While its hard to disagree with LeBlanc’s take on Nashville – hopefully it stays that way – it should noted that LeBlanc himself has got a pretty cool thing going on as well. He’s managed to develop and foster his own perspective as he takes Cautionary Tale out on the road for the remainder of 2016 and early 2017, before holing up and getting to work on LP4.

Dylan LeBlanc and his band will be playing in Nashville at The Basement on December 1st, 2016.