Lucius came through town on a packed night of events, going head-to-head-to-head with the CMA Awards and The World Series, ultimately coming out on top for one of the best sets at Cannery all year. 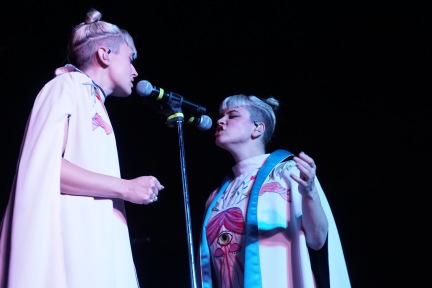 The more popular a locale Nashville becomes for “event” programs (i.e. The CMA Awards), the more of a strain it places on the bands and touring acts whose routes run them through Music City on the same night. Compound that fact with thought that there’s always a possibility of non-Nashville “event” programs happening elsewhere that might draw the show going inclined from their usual show-going habits (i.e., The World Series), and you have yourself a proverbial crapshoot for playing shows…. in most instances, that is.

In the instance of Lucius’ 11/2 Nashville stop, which had the highly regarded Brooklyn band pitted against such “event” programs as The CMA Awards and The World Series, Lucius certainly came out unscathed, and ultimately gaining the better of both of their head-to-head-to-head time slot adversaries. Following an excellent opening set from fellow New Yorkers Sam Evian (“like the water”), Lucius took the Cannery Ballroom stage with the resounding power and musicality that have become tenants of their live sets. Embodying true indie spirit (which is a particularly nebulous interpretation of self-reliance), Lucius wasted no time running through some early hits, like “Tempest” off of their wildy popular 2013 debut LP, Wildewoman.

The early hits were an evident point of social prosperity between Jess Wolfe and Holly Laessig and the crowd, as most of the folks in the front row of the managed to belt out tertiary harmonies worthy of the stage making for the first of many unexpectedly harmonius machinations that evening, with the next song, “Go Home” making such a scenario most evident as Laessig and Wolfe couldn’t help but let the crowd carry the chorus of “I don’t need you anyway” all by themselves. There was plenty of beautiful multi-part harmonies throughout the evening, but one of the suspected underappreciated aspects of Lucius’ live set has got to be the just how tight and in the pocket the backing band is – multiple percussionists and math-y guitar runs heightened the slick Moog modular work by Laessig and Wolfe.

Lucius’ live set has really come a long way from the Wildewoman days, as the songs off their 2016 LP, Good Grief and Wildewoman benefit greatly from the expanded sound, as songs like “What We Have (to Change)” (off of Good Grief) feel like happy 80s post disco synth bangers. The band dropped into “Something About You” which ended with a massive percussive explosion that led right into the softly saccharine “Almost Makes Me Wish For Rain,” as Laessig and Wolfe made their way toward the dual vocal mic that has now become synonymous with their live sets, facing each other head on as they crooned their way through to their first stage exit.

After a brief respite and a surf-rock interlude from Lucius’ backing band, Laessig and Wolfe returned to the stage sans-purple psychedelic cowls in favor of Southwestern fringe capes and the like, as the duo made the long journey back onto the stage not from side stage, but rather, the crowd. There were moments where it seemed as though Laessig and Wolfe weren’t going to make it back onto the stage, but they prevailed nevertheless. Once back on stage, the set reached the point of which a revolving door of guest features partook in a series of covers with Laessig and Wolfe, including opener Sam Evian, Megan McCormick, Ruby Amanfu, and members of the Lone Bellow, making Lucius’ set a more than formidable adversary for the CMA Awards, as the band and their guests covered everyone from Willie to Elvis.

Lucius’ Nashville set felt oddly familiar in the sense that the majority of their covers consisted of Nashville classics, like “You Are Always On My Mind” and “Can’t Help Falling in Love” and of course the collaboration between Lucius and their special guests, along with the superb crowd input as well. The crowd input played such a substantial role in the show, in fact, that Laessig couldn’t help but state that they knew they were in Nashville, because “everyone in here is a great singer.” Where most of the time, touring acts might be facetious in making such a quip, Laessig’s comment felt genuine, just like Lucius’ set. In the end, Lucius’s 11/2 set may have gotten the best of both its head-to-head-to-head rivals for the evening, as their set was unparalleled in surprises and enjoyment for the night. 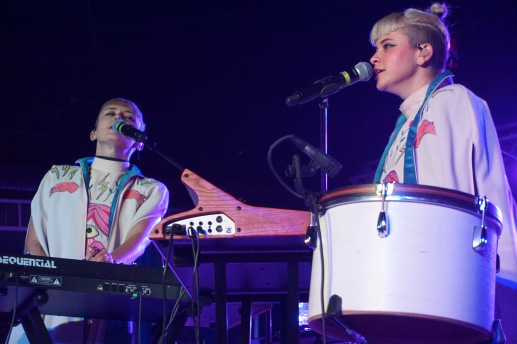 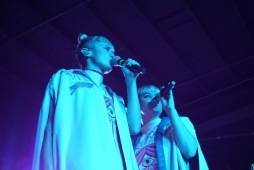