Skip to content
Chapel Hill's finest purveyors of blithe folk spirit, Mandolin Orange, made a stop in town this past week at Exit/In to support their excellent new LP, 'Blindfaller.'

Wit and witticism serves as a key tenant for southern culture gone-by – when the depression era state of constant sorrow and dread ran as thick as the sultry humidity lasting from late April to mid-October in the South – which rarely sees itself embodied in its purest form of repentant adulation, much less by a touring band, but as you may have guessed, there are a few folks that maintain such cornerstones of Southern tradition. 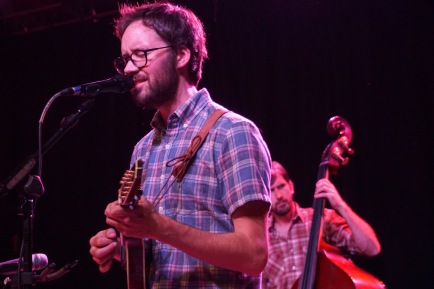 One such group of folks traveling the country singing tunes of Southern dread in the great oral tradition is none other than Chapel Hill’s finest folk band, Mandolin Orange. Rolling into Nashville in support of their sublime 2016 release, Blindfaller, Mandolin Orange lived up to at least one half of their name – hearty servings of mandolin, not so much with the citrus – by bringing their distinctive take on contemporary Appalachia mountain music to the Exit/In stage.
Following an excellent opening set from the precisely paired opener Dead Horses, Andrew Marlin, Emily Frantz and their cohorts wasted no time in imbuing their winsome anxieties of song upon the deferential Exit/In crowd. Opening their set with slow burners of apprehensive re-introductions in “Hey Stranger” and pastoral cries for War with “Wildfire,” both off of Blindfaller. Despite the pensive nature of Mandolin Orange’s set and songs, Marlin managed to maintain a certain sense of self-deprecating levity throughout the set, such as informing the crowd of his bum ankle earlier in the day, so he would be unable to dance, apologizing ever so loosely skewering Mandolin Orange as a dance band. Then, without any segue or introduction, Frantz went right into the winsomely doleful “There Was a Time.” 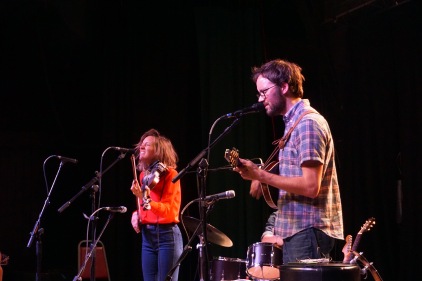 For a band that was borne out of the straightforward lyricism and unvarnished fiddle, guitar, and mandolin compositions, the expanded sound of Mandolin Orange is wonderfully lush and bright, all the while maintaining the key tenants of heartache and lament. The evening featured many an opportunity for intimate swaying about the Exit/In floor for those who came to the show with a partner to cherish, while those of whom came alone had ample chance to relish and wrap themselves up in the absolute emotionalism of the evening.

With such a fact in mind, however, Marlin never missed a moment to juxtapose the rapturous moments with more purposefully bleak witticisms, such as his quip following “Picking Up the Pieces” – ‘Y’all doing alright out there? We drove here from Albuquerque two days ago; a lot of flat country. That’s the whole story. Here’s a song about death.’ – and led straight into “Lonesome Whistle” off of Blindfaller.

Where one might assume the depth and breadth of each Mandolin Orange layering of visceral emotion after visceral emotion and the subsequent juxtaposition brought about by Marlin’s humorist ways might cause for anyone in attendance to run the full gamut of emotion, such an assumption would not be wholly out of the question. In fact, for every couple that stood in each other’s arms desperately seeking solace in the moment, there were folks talking describing their innermost desires of an ideal Mandolin Orange listening event – an actual quote from a young man having a 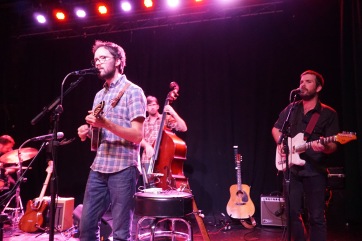 particularly pleasant evening, ‘If I was running a puppy right now as I hear those fingers on that fiddle and mini guitar [talking about the mandolin] , I’d be content.’ – as Marlin, Frantz and company served as the finest of emotional navigators.

The evening was one of supreme feeling and sentiments, with Marlin’s indifferent humor continuing to toy with the emotional states of the crowd, only to turn things on their heads with affecting renditions of Mandolin Orange songs – one such song being “Wrecking Ball” off Mandolin Orange’s 2015 release Such Jubilee, the “if every girl could be more like you and shelter me,” tearing right to the core. Then there were the songs that effortlessly silenced the entirety of Exit/In, “Take This Heart of Gold,” in particular, as the opening line of “Take this heart of gold and melt it down,” combined with the deft instrumental build brought everyone perilously close to the edge of tears.

While there was many a standout moment of deep human connection juxtaposed by blithe Southern spirit, to delve any further into the evening would be a great disservice to Marlin, Frantz and their cacophony of compatriots, as their set managed to purvey aspects of emotionalism and heavy sentimentalism in unfathomable fashion. An evening as idyllic as Mandolin Orange’s is best experienced in person as opposed to being described through text, no matter how grandiloquent the language, as the muted beauty of Mandolin Orange’s moves in the hearts of those who will listen like few others before them.