Skip to content
Buzzy Melbourne folk duo Oh Pep! made their way into Nashville on August 4th in support of their debut LP, 'Stadium Cake,' and expressed their love for Mas Tacos during the set.

Nashville is a sucker for a good folk pop group, and this past Thursday saw one of the best folk pop acts on the tour circuit – Oh Pep! – roll through the High Watt. Touring in support of their sublime debut, Stadium Cake, a 12-track jaunt through high powered folk pop by Olivia Hally and Pepita Emmerichs. The duo had local female chanteuse Natalie Royal open up, performing tracks from her own excellent LP, Harbinger.

Following Royal’s opening set, Oh Pep! opened up to an initially reserved crowd before Pep assured the crowd that their safety would be more than secure during the set. One of the first noticeable facets of Oh Pep!’s live show is the near facsimile reproduction of their recordings, but with better recognition of Pepita’s exceptional mandolin and violin prowess. Then there’s the fact that the Melbourne duo someone manages to produce and absolutely affectation-less timbre in their songs that wouldn’t indicate any regional derivation or point of origin, which (in my opinion) adds to the allure of an outstanding live folk show. 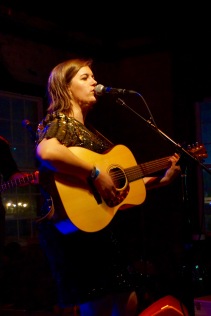 In certain instances, Olivia’s vocal timbre recalls similarities to other contemporaries such as Basia Bulat, though Hally’s ability to slip in and out of a clear falsetto is enviable to even the most adept of vocalists, point and case being the set’s cleanup song, “Crazy Feels,” which saw Hally venturing in and out of the falsetto hooks with the greatest of ease, but Emmerichs rounding out with some sweet violin vibrato to match.

While Hally and Emmerichs both possess extreme musical talent, they both have more than enough ability to provide proper banter in between songs during their sets, as Emmerichs took a moment to appeal to the Nashville ego by confirming that Mas Tacos has the best tacos she’s ever had, which was met with a validated applause. There were many moments of necessary and deserved applause throughout the set, but one of the more endearing moments of unintended applause breaks popped up during “Tea, Milk & Honey.” The track is utterly beguiling, as Halley all but silenced the High Watt crowd running through the track’s first two-thirds, and taking a brief pause to collect herself emotionally (which makes sense considering the beauty of lyrical prose like “she sings like a church with a choir in it”), before diving into the song’s final winsome stanzas.

Oh Pep! shows are a borderline master class (I use the qualifier only because the duo has only just begun their ascension to folk pop mastery) in how to endear oneself to their audience in every way imaginable. Halley and Emmerichs are more than happy to poke fun at themselves prior to a song – a couple of times they revealed that certain songs that either one may not have been as big a fan of as the other – and then the fact that they’re just an excellent musical duo. Seeing as this was their first headlining show in Nashville, it won’t be their last, though I can assure you that the next one will be harder to come by tickets as Oh Pep! continues to clamber up the folk pop mountain.