Skip to content
Robert Ellis returned to Nashville to play music and opine about social media at 3rd & Lindsley on the eve of America's Independence Day.

Listen folks, we have to stop asking Robert Ellis about Nashville. Sure, Robert’s been polite enough to play along – “I don’t what it is about this city, but every interview I do, I ge

t asked about Nashville.” –and he loves the city just as much as the next transient musician – “I lived in Nashville for one year, and for 300 of those days, I was traveling” – but we have to stop trying to emblazon the Nashville name across his forehead.

It makes sense, though – you can’t really fault anyone for trying to claim a maestro of quick wit and guitar licks like Ellis – he’s the idyllic “poster boy,” “figurehead,” “iconoclast,” or “whipping boy” (maybe not that last one) of his transient locales’ (Houston, Austin, Nashville, New York) respective music scenes. He’s a bastion of the “next wave” (though no one ever wants to venture further in description than that; irony!), clever and disarmingly dry in between songs, and unparalleled on the frets in between quips.

Ellis made his triumphant return to Music City as the improbably prodigal son with no immediate association with the city – save for those 60-some odd days spent popping around town and crying at Time Jumpers shows – the marquee performer for Lightning 100’s “Nashville Sunday Night” series at 3rd & Lindsley. Following a fine opening performance from Tom Brousseau, Ellis and his snappily dressed cohorts took the stage sporting sartorial stylings that ranged from tropical to celestial, but we’re not here to talk about who’s wearing who (though Ellis’ “space suit” was custom made by Union Western Clothing), we’re here to talk about the music.

Being a guitar virtuoso that has received acclaim from the most vaunted of Opry members to podcast curmudgeon extraordinaire Marc Maron, it was somewhat disarming seeing the gentleman from Houston open up the set with a little bit of space age synth work via “Perfect Strangers” and “How I Love You” off his fourth (and eponymous) full length, Robert Ellis. While the early synth-centrism might be somewhat unexpected, there’s an aspect of Ellis’ live sets that might come as even more surprising for the uninitiated – the guy is as quick witted as Neil DeGrasse Tyson is over qualified for the 4th Grade science fair – he emanates sardonicism in almost every utterance.

With the show being simulcast over the radio, Ellis’ clever proclivities could hardly help themselves, as he took a moment to address just how “tickled to death” he was about the idea of dead air on the radio, that “someone could be driving in the car and then hear nothing but silence.” After taking a moment to assure the radio production (and in a round about way, the FCC) that he was painfully aware of what words he can and cannot let “slip” out on the radio, he went back to the set with “Steady as the Rising Sun.” A proverbial deep cut from The Lights from the Chemical Plant, “Steady as the Rising Sun” is a sweet and smooth waltz of song that Ellis described as a “sexy jam” perfectly suited for radio, and he wasn’t wrong.

As it turns out, “Steady of the Rising Sun” was a Twitter request, just proving Ellis’ necessary presence as a bon vivant for the “next wave” of musicians for the millennial generation! Joking aside, the recognition of the Twitter request got Ellis on one of the most hilarious social media digressions I’ve ever heard – at a show and in general. Ellis was more than willing to express his profound adulation for social media, more specifically social media apps centered on a certain “rendezvous” mentality. He assured the audience that the music they heard that evening was available for purchase on both Tinder and Grindr, which led him to the willful admission of being on Tinder. He had no qualms discussing his Tinder usage, talking about the hilarity of setting the “search” radius to one mile while at a show and imagining what the conversation would be with someone he matched with that particular evening – “Oh, I see we have one shared interest – my band.” 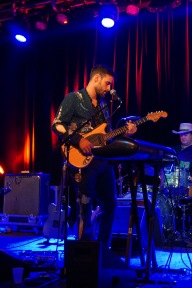 for an interesting juxtaposition of “heavy” songs like “Amanda Jane” but there was never a tonal confusion in terms of what Ellis hopes to achieve during his set. There were moments taken by Ellis to recognize the immense fortune of his situation and express his
gratitude for an attentive audience after years as an opening band forced to avoid playing tracks like “Chemical Plant” for lack of stimulation, and then Ellis would spend his next moment to admire his custom “space suit” highlighting his Houston roots all in service of dropping a “some people call me the ‘Space Cowboy,’” line. Then Ellis would preface a song like “Couples Skate” with nothing more than “This is a children’s song” and proceed to drop into one of the heaviest instrumental breaks of the set – that thanks to some phenomenal assistance from Ellis’ backing band – that made you want to land a haymaker on the person next to you before you picked them back up and kissed them clean.

In all honesty, I could probably go a solid one thousand word further to further recap the set with every tasty little morsel of music and top banter, but with respect to the readers’ time, we should probably end soon. Ellis finished the radio set with “Houston,” a goodbye love letter to his hometown – yet many people continue to assume he’s a product of Nashville – that ended up being the most moving and visceral song of a set (in my opinion, of course) that felt like a goodbye letter of its own, but this time to Nashville. While Ellis will always have a little bit of Texas twang in his guitar and aspects of Nashville and New York here and there in his music, its safe to say he’s transcended the need for a “home base” altogether, as his true home is on the stage.