Skip to content
We talk with two thirds of Harpooner about their debut LP, Rose Park, and get some insight into the 1970s pop three-piece. Head on over to The Basement tonight to hear them bring the kaleidoscopic album to life.

“If someone asks what we sound like, I say that we do 1970s pop. And if they say ‘what does that mean?’ I just say that I like Carole King a lot.” And that’s pretty much all you’ll get from Scott Schmadeke, Harpooner frontman and one third of the past-punching collective. When I pull up to the band’s house on a Friday afternoon, albeit a little late and a bit dazed by the week, Josh Morrow (drums) is dashing out the door, and Scott and Max Mullen (bass) are babysitting an energetic four-year-old for the day. Circumstances considered, we kick off our interview over popsicles and jump into talking about the band’s journey from Bloomington to Nashville and their debut LP, Rose Park. 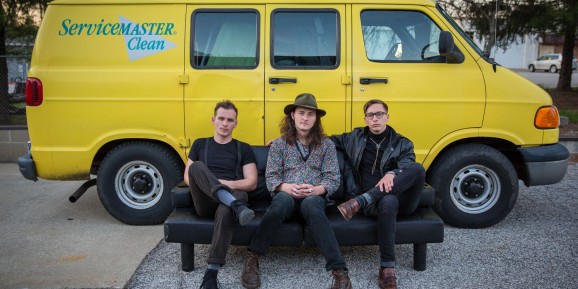 “Honestly, I wish we had never had to leave, but it just got to the point where we had to,” Scott candidly says. Max interjects, “the stars had kind of aligned. Between us touring and having a few friends move here, we were all kind of ready for a change.” From the little time I’ve spent in Bloomington, there is a sort of happy magic about the college town, and Indiana University always claims some of the best musicians. The circumstance was true for the three-piece that met while working at Lenny’s, a pizza place in a strip mall. “We were originally called Lenny’s House Band for the first three or four house shows we played,” Scott recalls, inspiring my curiosity about the current band name. “It’s from a painting Max showed me, and the name of the painting was “Harpooner.” I’ve never forgotten the name of that painting since. All you can see is the wire attached to the harpoon and the harpooner stretched out totally parallel to the water because he’s diving to spear a whale. I just liked the weightlessness of it all,” he continues. So from a painting and propelling into contemporary reality comes Harpooner and in 2014 comes a relocation to a more Southern city that earns them a now “Nashville band” title. Having met the good people of bands like Blank Range, Ranch Ghost and Chrome Pony, among others in their Indiana time, the new city felt a bit more familiar but still not like their city. At this point they had only released an A & B side on vinyl (with a hidden Paul McCartney cover), so they were living in an age of output intention, one in which they still live and create. Nashville had purpose, but they weren’t leaving their beloved Bloomington without the city in tow in some capacity or another.

Rose Park, Harpooner’s debut LP, is a montage of 1970s nostalgia, an era none of the members know by experience but only by sonic emersion, and the refreshing sound of the album as a whole is probably due to the fact that the current “Nashville” sound is nowhere to be found on it. “We recorded this album at Blockhouse in Bloomington with our friend Andy Beargie…it was interesting, because Scott had a very solid idea of what he wanted it to sound like. We recorded it all to tape, and we actually didn’t even use a computer until we started mixing,” says Max. “Technically our sessions were 2pm-midnight, but Andy would leave at about midnight, and we would keep working until about 5 or 6 in the morning,” elaborates Scott. The recording process took 32 days over the span of ten months, and the band’s generation is kaleidoscopic pyschedelia that’s less trippy and more experiential. “I’ve had these sounds in my head since I wrote the songs, and I wrote them while living in Bloomington, so I dwelled in them quite a bit. I knew how I wanted [the record] to sound, and I wasn’t going to stop until we made it there,” Scott asserts. Having recorded all the songs at least four times previously, minus “Love Shadow,” which was written while recording, the band had come to know the songs quite well, and their relationship with them is sensationally evident on the album.

Evocative of a colorful era, it’s impossible to deny the emulations of their favorite artists, most notably The Beatles, but it’s certainly not imitative. Rose Park is teeming with production references that are innovated to suit the three-piece’s chemistry and style. Kicking off the album with “Carolines,” a cyclical prism of pulses and string accents, their attention to rhythm is engrossing, especially if you pair the experience with the music video (see below). The mood-inducing melodies carry you through “Love Shadow” and “Stolid Head,” which is a track with some of the best lyrics on the entire album (teaser: “your insecure overture is bringing me down”). “All I Get Back” is a swift retrogression into the most Beatles’ allusion I’ve heard in awhile, punctuated by guitar and bleeding perfectly into “Bigger Thoughts,” a track most memorable for its piano mural. That idea of ‘weightlessness’ Scott mentioned earlier about Harpooner is found in “Hush Up” and “Cosmic Love,” two exhales of organized chaos created by strings and lush orchestrations. By tracking the piano, bass and drums live and overdubbing the vocals, strings and extras, there is an Elysian energy that makes the complex marriage of elements unlike anything you’ll hear around this town.  With the help of Diederik van Wassenaer on violin/viola (expect more words from me on this guy) and Josh Menashe and Owle Sigman on guitars, the album comes alive in its intricacies and harmonies. Understanding that there is so much to choose from, I ask what their favorite part of the album is. “Honestly, I really love the art,” Max expresses, picking up the freshly delivered vinyl covers. And that about sums up all the clues I got from Harpooner: everything you want to know about them is on this album, and they leave it there for you to unearth.

Rose Park is coming to you tomorrow, but we’ll be posted up at The Basement soaking up Harpooner’s set tonight for their vinyl release show with Chrome Pony and Walking Man. We recommend you do the same.