Skip to content
Three strong picks from Kevin - Foxing, Seratones and Savages - before he heads to cover this weekend's Shaky Knees in Atlanta.

Apologies for this week’s agenda being a bit on the scant side. I’ll be heading down to Atlanta for the weekend to cover Shaky Knees, for which a full recap will be put up here next week.

Thursday, May 12th – Foxing at The End

Dreaded stigma of the term “emo revival” aside, Foxing might be one of my favorite (if not also one of the most divisive) bands of the movement. While critics knock the band for being a bit too precious when it comes to songwriting and too reliant on gimmickry (frontman Conor Murphy employs both a trumpet and a sampler) in the live setting, these same grievances are what most of the group’s devoted following point to as positive qualities. They’re a powerful, nearly transformative live band, packing two albums’ worth of screamed choruses and rolling catharsis into short, efficient sets. Memphis-based Greyscale (playing their last show ever), and closer locals Secret Stuff and Sinal Vessel open. $12. 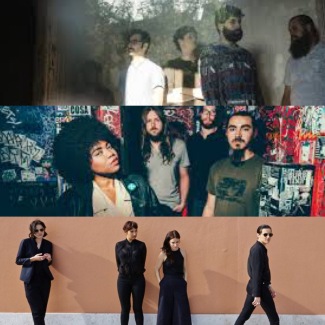 Friday, May 13th – Seratones at The Basement

Still seething that you didn’t get to see Alabama Shakes at Ascend a few weeks back? Well, gripe no more, as you can catch their immediate heirs before they start to crest like Brittany Howard and company did a few years back. The Shreveport-based rock outfit are similarly led by a powerhouse female on lead vocals and guitar, in this case the razor-sharp and powerful belter AJ Haynes. I saw this band play a Communion showcase at The East Room back in February and deeply insist that you figure out a way to get to this show. Watch their Tiny Desk performance if you’re not convinced. Tennessee Muscle Candy open. $6.

Saturday, May 14th – Savages at Exit/In

One of my most anticipated sets at Shaky Knees this weekend is that of the British post-punk quartet Savages. Led by one of the more electric frontwomen in music today, this band traffics in pounding and melodically unwound compositions that will fit in just right at Exit/In. Yeah Yeah Yeahs side project Head Wound City open, making this an especially noteworthy concert. $20.