The native singer-songwriter gives us a tour of the places in town she used to frequent growing up that she still visits today. And if you've missed her like we have, head on over to the Basement East this Wednesday night to catch her set.

“How do you feel about all the changes?” It’s a question I have to answer often, usually after the “you’re a native?!” rhetorical question that follows my “I’m from Nashville” answer. And it’s a question I struggle to answer because my hometown experience is very different from the recommendations featured in editorials and it-lists. To me, Nashville still feels like the days spent outside until they turned into nights and tastes like honeysuckle and humidity and sounds like neighbor conversations and midnight cruises down Highway 100. I spent time with friends around fires and in parks after close, intermixing young and dumb moments often enough to satisfy the teenage quota, and I experienced more music within the confines of my ’94 Volvo station wagon than within the walls of venues. Life growing up wasn’t glamorous or media-worthy, and Nashville certainly isn’t the same city it was many years ago. But strip away all the additions and changes, and this city still rests easy amid the chaos of popularity and expansion, found sweetly in the roads and the people and memories that are as of the future as they are of the past. 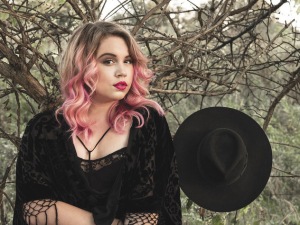 And this idea of honest existence in the presence of created hype is why I’ve got a thing for Taylor Brashears. She’s brilliantly frill-less and totally herself, riding in the effortless wave of her voice and writing music that is as timeless as it is beautiful. Taylor has the ability to make you feel familiar from the first chord, and she has this ease and energy about her that you can hear in her songs. Country stereotypes aside (a modern development that is sadly a product of the Nashville evolution), her sound is a bit nostalgic and seems to pull Southern threads from the past into the texture of her music. Keeping in the spirit of that down-home essence, I saw Taylor at the 5 Spot a few months after her performances on the Voice had aired, and it was further proof that she is just as captivating sitting on a stool, strumming her ukulele solo as she is beneath hundreds of lights and in front of thousands. Much like this city, one she grew up in as well, take away the glitz and buzz of the scene, and Taylor Brashears will still be as magnetic as ever.

Let Taylor be your native tour guide as she tells us the five places she still goes to that she went to in high school, and be sure to catch her at the Basement East this Wednesday, March 16, with a slew of Nashville ladies.

I think the first midnight movie I can remember seeing was The Big Lebowski. I was 16 and my dad, who was one of the only people dressed up, provided a round of White Russians to my friends and I. Growing up in that neighborhood, the midnight movie was always a great excuse to leave your house without having to convince your parents that you weren’t smoking weed in the park (but that was a must before seeing the midnight movie).

Speaking of our teenage rituals, Dragon Park was probably where I spent most of my days and nights in high school. My closest friendships all blossomed from us being extremely bored and wandering down to the park because there were always friends down there. It might have been us getting older or it could have been the cops finally catching on to the loitering until 3am, but the typical “Dragon Hangs” had an abrupt end. That’s why I like to make a point to grab some beers and hang at the park with the friends that stayed in Nashville.

3. The Doyle and Debbie Show

First off, let’s talk about the Station Inn, my favorite venue aside from the Ryman. I have had the amazing privilege of playing at this venue and have seen so many great acts including f*cking Dolly Parton. But the one show that I have continued to see over and over is the Doyle & Debbie Show. It’s the one thing that I do want everyone moving to Nashville to see. This hilarious country parody show has only had a couple of minor changes over the eight years that I have seen it but it still makes me laugh until it hurts. When I was 17, I spotted George Jones in the crowd and although the show’s main character could easily be based on George, he still seemed to enjoy the crap out of it.

If anyone knows me well, they know that I spend way too much time at Melrose. I used to frequent this bar with my brother before I turned 21 and no one asked any questions either because he looked terrifying or because they knew him. People always complain about the smoke and how they smell like an ashtray when they leave, and I love that! Please, go away. I love that I can sit in a dark booth for hours on end, people watch, and enjoy the best pours in town by my favorite bartender, Chandler.

I definitely went to Bobbie’s before high school but when my best friend, Lilly, got a job here, we spent way too much time smoking cigarettes and eating veggie burgers here. It was either the beginning or the end of a typical “Charlotte Run” which included Southern Thrift, Goodwill, and Great Escape. I just recently moved to the Nations and now I get to live right around the corner from Bobbie’s!