We venture out on a rainy Nashville night in search of sunny-gloom beach goth and find redemption courtesy of the Growlers' Exit/In gig.
The Growlers have been the creators and kings of beach goth for the better part of the last decade and have shown no signs of slowing down as they have been touring non-stop since I saw them last year at Exit/In. Gypsies, vagabonds, hippies–call them what you will, but there is no denying these guys live for the less than luxurious life on the road touring in an old van/bus hybrid they gutted themselves hitting city after city. Somewhere in between these long nights they have managed to plan and organize their annual neo-psychedelic festival ‘Beach Goth’ (October 24-25) in Southern California which features 12 bands including Julian Casablancas + the Voidz, Mac Demarco, The Drums, and Eagles of Death Metal to name a few. To cure my blues of being stuck in a landlocked state, I peeled myself away from my hot apple cider and Netflix for a much needed night out with The Growlers. I was running late per usual and caught the very end of Australian openers The Babe Rainbow before heading outside to be disappointed the Tiki Bar wasn’t open due to rain. I was trying to pretend I was in California, OK? It was no surprise I ran into Kevin as we often find ourselves unknowingly at the same shows. Beach House last week, anyone? I headed back inside just as the crowd roared and the band took the stage. No DMTina was in sight this time around and the crowd seemed slightly more tame, so I grabbed my friend’s hand and dragged her to the center of the hung at heart crowd to dance. The rest of the night was a euphoric blur of sing-a-longs and grooving to a balanced blend of old and new from a band that forever takes me to a sunny place on a rainy night.
Words by Kimberly Baugh /// Photos by Kevin Brown 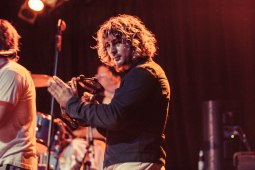 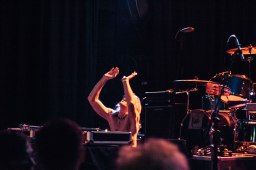 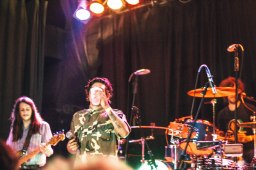 Brooks Nielson of The Growlers, warming up for the band’s nearly two-hour long set 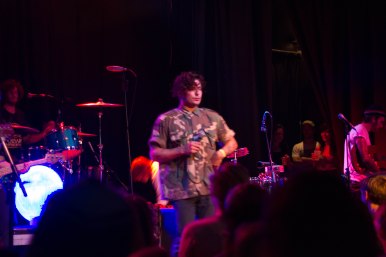 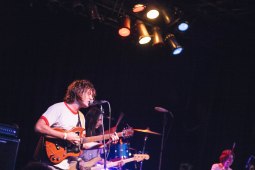