Skip to content
The Maryland-raised, country-bred siblings take us to their favorite local music shops - check out why they love places like Corner Music and Fanny's, and watch their new video for "Stay a Little Longer."

Most people might think that Maryland is an unlikely place to breed a country duo, but then you don’t know Maryland like I do. My father was raised in a suburban area just outside of Baltimore; it was the Maryland of Barry Levinson movies, of brick houses, lox and bagels and Jewish mothers who talked too much and cleaned their kid’s faces with spit: a rich place where gossip and heritage ruled, and laughs and music overshadowed heavy histories. But there are a lot of Marylands. 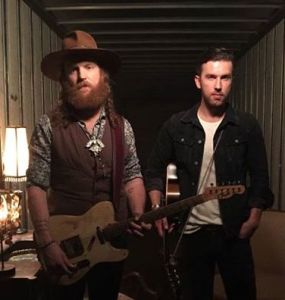 I know that people from this particular state are a special sort – good at living both in and out of context, born as ceaselessly into the past as they are the future. It’s partially in the geography: technically southern, containing everything from deep Appalachia to boundless city life and sprawling suburb. It even has its own accent: ask anyone from there to say “water,” and you’ll know what I mean.

Which is why I wasn’t surprised at all when I learned Brothers Osborne were from Deale, Maryland – their music is filled with diverse influences, but shaped into something all its own. Like their home state, the sound that brothers T.J. and John Osborne is make is southern: country for sure, but with many other building blocks and tips-of-scale that teeter into bluesy, rock ‘n’ roll territory.

Their single, “Rum,” is brimming with duality, too – it’s a laid-back summer anthem, but underneath are layers of down-home, tin-can-and-washboard melodies that cement it as something more than just a fun singalong; it boasts an infectious beat, vocals that glide smooth but with quirky breaks and a tone that’s Jack Johnson if he traded his surfboard for a pontoon and ukelele for a steel guitar. Watch their newest video, for the song “Stay a Little Longer,” here, which premiered today over at Billboard.com

“Everything Brothers Osborne has done to date has been very honest and very real — we’re not bullshitting, we’re not lying, we’re not making it up,” John told Billboard.com‘s Katy Lindenmuth.

The brothers are currently working on their debut album – and thus, they chose to bring us their favorite local music shops. If you’re lucky, maybe you’ll catch them at Rock Block not playing “Stairway.” Or, more likely, out on tour with Eric Church. Either way, you’re sure to be transported to their unique universe: part Maryland, part Nashville, all country.

1) Corner Music: Corner Music has been a staple ever since we moved to Nashville. As a plumber, our dad developed a great one on one relationship with the folks at the local hardware store where we grew up. We get the same feeling at Corner. Except its a pack of .011 gauge D’Addarios instead of 3/4 inch copper pipe. An “everybody knows your name” kinda spot that has pretty much everything you need when you need it.

2) 2nd Gear Used Music Consignment: The newest store on our list. Like most musicians, we spend far too much time channeling the depths of Craigslist hoping to find a “deal” or that cool left of center guitar nobody has yet. 2nd Gear is basically the best of Craigslist but all in one shop! The prices (established by the seller as it’s consignment) are more than fair. If you’re a hard core collector or a penny pinching, up and coming musician, there’s something for you. Not to mention it’s owned and operated by Nashville guitar guru Tom Bukovac.

3) Rock Block Guitars: Another Nashville staple. There’s been a massive influx of boutique pedal builders over the past several years. It’s hard to know what’s up or down in that world. The guys at Rock Block are there for such a predicament. There are tons of places to buy effects pedals but they have what you need (new and used). It’s another know you by name place. You’ll never get the “don’t play Stairway” vibe there. Then you can go next door to Elliston Place Soda Shop for a pretty bangin milkshake.

4) Fanny’s House of Music: Fanny’s is probably the most comfortable music shop in Nashville. Located in a historic 5 Points home, it feels like you’re hanging at your cousins place who has a bunch of cool instruments and amps lining the walls. They have a great selection of obscure brands you wouldn’t normally see at your typical “mom & pop” shop. Not to mention they have a great vintage clothing selection and one of Nashville’s best hot dog stops in their back yard. 3 birds with one stone!

5) Carter Vintage Guitars: For years Gruhn Guitars cornered the high end, new and vintage, market in Nashville. That is until Carter showed up. The walls are covered in some of the best instruments you can find. Specifically acoustic instruments. They tell you to go ahead and grab anything you want and play away which is very unlike high end shops. Last time we were there we played a 1941 Martin D-45. Rarer than rare and more expensive than the house we grew up in. Then the owner offered us an American Pale Ale from the awesome Jackalope Brewing Company which also happens to be next door. Beat that!