Find what five Nashville experiences shaped the musical future of LA duo Bjorn and the Sun, from an endless snow to a night in the round 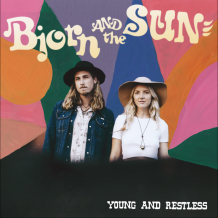 I first met Amanda Bjorn and David Donaldson of LA folk duo Bjorn and the Sun in Nashville last fall. The couple had just thrown as much in their Volkswagen as it could carry and embarked on a cross-country road trip to write and record and album. Somewhere along the way and in between getting to know Nashville, they found inspiration in the city’s soul and charm of the southern way of doing things. After four months, Bjorn and the Sun had recorded their first full length EP Young and Restless at a Nashville staple, the Bomb Shelter, with Grammy Award Winning Andrija Tokic.

Even in the short time of getting to know the creative souls behind Bjorn and the Sun, I can honestly say that Young and Restless mirrors the couple’s personalities more perfectly than anything I’ve seen in a while. The music is honest, heartfelt and free spirited, the kind of music that makes you want to kiss your lover, dance barefoot and drive windows down with no particular place to end up in mind. The album marries sunny, golden LA folk vibes with the classic sounds of southern blues including plenty of feel-good, road trip anthems like “Young and Restless“ and “He Let Her Go” along with a few more heavily Nashville influenced roots songs like “Tennessee” where Amanda sings, “I got time on my side, California’s far behind. Down in the country, you and me. We belong in Tennessee.”

Here are five Nashville experiences that influenced Bjorn and the Sun’s first E.P. “Young and Restless.”

by Bjorn and the Sun

Right when we drove into Nashville, we were in need of some new gear as we could only carry so much in our little VW beetle. Solely based on the name, we decided to head over to Fanny’s House of Music. We immediately saw the mural on the outside wall, which is a collage of female guitar playing legends, including some of our favorites from east and west coasts, Sister Rosetta Tharpe, Memphis Minnie, and Joni Mitchell. Fanny’s instantly became a bi-weekly destination. The company has the friendliest and most helpful employees who would let us stay as long as we want trying each and every one guitar. One visit, we even got to do a performance for a Hotel Indigo promo right amidst the acoustics! Most of all, Fanny’s gave us two beautiful guitars that went on to shape the distinctive sound of our E.P.

2. Songwriters in the Round, Bluebird Café

A few weeks into our new life, we were invited to a very Nashvillian experience. Our talented friend from Los Angeles, Louise Goffin performed at Songwriters in the Round at the Bluebird Café along with incredible artists Matraca Berg, Gary Burr, and Dave Berg. Nashville songwriting is such a unique process and is unlike any other city in the world. It’s a city where storytelling and songwriting are one in the same. This really resonated with us and influenced our decision to create an E.P. that is a continuous story with each song as its own chapter.

When we arrived to Nashville, everyone told us that the winter was mild and that it doesn’t snow here. A month into our new life, we were pleasantly surprised by the arrival of fresh powder early one morning followed by a week of below freezing temperatures! Being from California and Florida, we weren’t familiar with the idea of staying indoors all day or not seeing the sun (for an entire week at that point). Although the first few days were a bit unsettling, we quickly adopted this new way of life. We took comfort in this hibernation and found it an opportune time to drink tea and write. Three of our songs from the E.P. arose from being literally forced to sit inside with our own thoughts while banging it out on the piano.

We first read an article on NPR about Andrija Tokic, the producer at The Bomb Shelter, and were immediately drawn towards his sound and his work. We are huge fans of Alabama Shakes and Hurray for the Riff Raff and were fascinated with Tokic’s old-school approach of using solely tape. Ultimately, what we learned and discovered is that this approach is invigorating and completely refreshing! Removing ourselves from the computer trained us to a whole new way of listening, performing, and playing. Tokic is a wizard and he (along with the help of our unbelievable players Dave Racine, Jon Estes, Ben Alleman, Alexis Saski, Aliza Threkeld) pulled some serious Nashville soul out of our music. We are forever grateful.

The experience that changed and influenced our music the most is the incredible community of Nashville artists and musicians who welcomed us with open arms. We are still overwhelmed with the amount of love and support we received from new friends in such a short period. Our friends invited us into their homes, cooked delicious meals for us, let us play in their living rooms, housed us, offered guidance, and most importantly loved us. All of this support and love went directly into the E.P. We couldn’t have made it through the five months without each and every one of them. You know who you are and you always have a home in California!

Check out Bjorn and the Sun’s new music video for single Young and Restless below: