Skip to content
We explore the exciting fashions at KITTY, Nashville's newest boutique, and the music behind its stylish owner, Sarah Davidson of Stella /// James 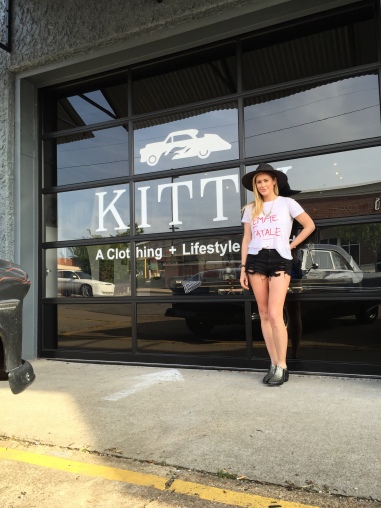 If you’ve been to Barista Parlor‘s original location on Gallatin in the last few months, you surely have been perturbed by the loud construction taking place while you sipped your cold brew. The prime real estate promised something good behind the papered windows and local business owners all had their eyes on a spot in the building. On a rare leisurely Monday, I wandered around the building after stopping in tothe new Local Honey space (which offers more creatively reconstructed vintage pieces as well as a cool, unpretentious salon) until I faced another big garage windowed door with big white letters “KITTY” and a vintage car decal. It looked dark inside, so I shyly peered through the door and saw a blonde beckoning me in. After opening the door, I was greeted by a lavender scent and a sweet smile by Sarah Davidson, owner of KITTY and 1/3 of folk band Stella // James.

My eyes flickered around the sizable, but cozy space at the gold details, the enviable cowhide rugs, the records and treasure trunk bar in the corner–the little details all over the room had at first distracted me from the fact that this was a store and not just an impeccably decorated apartment. Perhaps most notable was the entire wall adorned with classic photos of musician babes Stevie Nicks, June Carter, Dolly Parton and Kitty Wells.

After eyeing a gorgeous pair of black ankle boots from the new Kate Bosworth x Matisse line on the shelf (seriously chic collaboration), I noticed shop owner Sarah was donning some slick snakeskin boots that I had to comment on. Girl talk turned to real talk and I was immediately inspired by her drive and ability to juggle all her passions without letting one slip to the wayside. It came natural for the Georgia native to open up about why she started her own business, her plans for music, and her favorite female artists and shop owners. 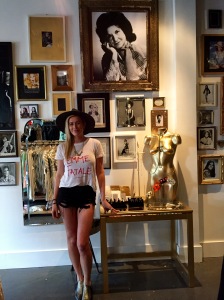 “KITTY basically came about after a conversation with my manager last year. He was telling me that I didn’t need to do styling on the side as a recording artist because people would get my brand confused. Something in that conversation clicked in my head and I immediately remembered the story of Kitty Wells. I’ve always been drawn to the story of Kitty and how she lived her life from authentic inspiration and did not let anyone’s social limitations stop her from accomplishing all she wanted to in her career and personal life.” Sarah gushes over the accomplishments of the pioneer country star from owning her own record label and merchandising company during a time when women in positions of power were unheard of, touring til she was 82, all the while being a wife and mother for over 73 years.
“In my aha moment I realized that my ‘brand’ was that there is no brand. That we all should and CAN live life from a place of authenticity while following the passions in our hearts. It doesn’t matter what other people think you should be or what society says you should be. KITTY the brand is a celebration of all of the badass renaissance women who have gone before us and paved the way in some way or another.” Sarah plans on spotlighting fellow females who refuse to settle for mediocrity through an honor she calls, ‘KITTY of the Month.’ “I want to share the stories of all of the women out there doing the same thing today. Women who aren’t just business women, just mothers, just artists. By telling the story of each of these women, I want to also talk about what these women are wearing.  So many people have a misconception that Nashville style is simply denim, cowboy boots & hats, and sundresses, which is absolutely not the case.” I mean, really? People STILL think this? I can relate as I often have to convince my friends back in Chicago I’m not living in the country, country. Sigh.
So where does Sarah shop? When performing with folk country band Stella // James, Sarah’s stage look channels the likes of Stevie Nicks with fringe and lace. Today she’s wearing cutoff shorts, a shirt from the shop, gold jewelry and hat, and those drool-worthy boots I mentioned before (psst–they’re from Haven!) Her style is thoughtful and put together, approachable, yet could easily be seen on it’s own style-dedicated blog. As if she wasn’t likable enough already, Sarah has nothing but praise for other Nashville gals who have set up shop.
“I am such a huge fan of all of the boutiques in Nashville.  My favorites are Haven & Hero (both boutiques owned by one of my style icons and idols Claudia Fowler. Claudia worked her way up in the Nashville styling scene and has been one of the forefront stylists in this town and it’s awesome that her styling is accessible by simply shopping at her store. Not to mention she is an amazingly fabulous and kind woman that I have looked up to for years. I’m also a huge fan of H. Audrey and White’sMercantile both owned by Holly Williams.  I love how Holly shares her family history (and not just her famous family history) in all of her endeavors and its also awesome to see a woman out there living authentically inspired.  She is not only a boutique owner, but a brilliant songwriter, performer, wife, mother, and friend.” She also recommends Cadeau for eclectic home pieces and Starstruck Vintage as her go-to for all things vintage–primarily rock and country concert tees aplenty.

Sarah just held her grand opening party for KITTY last week, which featured a live performance by Stella // James, brews from Yazoo, Electric Sliders, and of course shopping discounts and gifts (I’m especially keen on the teakwood candle and KITTY flask). Welcoming and warm, along with a natural eye for fashion and what a girl wants, Sarah has all the characteristics of a successful shop owner. But beyond that, she’s a strong supporter of her fellow females and has the type of PMA that can get any girl’s ass in gear to get up and do the same.
“We were created to be different, unique, and authentic and there is something in each of us that needs to be shared with the world. Just say what you think, do what you want to do, and be who you want to be, regardless of what other people think or say. There is something so dynamic and badass about a woman that is unafraid to be herself…and that woman CANNOT be stopped.” Here, here.
Stella // James have their Acoustic Demos Vol. I available for free download here and you can catch them next at Whiskey Jam June 8th. In the meantime, get to KITTY // 521 Gallatin Avenue.
– Kimberly B.