Skip to content
Sleater-Kinney made their first Nashville appearance in almost a decade last night at Marathon Music Works. We sent our Happenings Editor, Kevin Brown, (along with photographer Jake Giles-Netter), to capture the evening's proceedings and analyze the band's status as one of the essential rock groups of their generation.

Depending on who you ask, Sleater-Kinney is either the greatest rock band of their generation or merely the most influential. I would like to posit the idea that neither is the case, but that they are nothing less than the most important musicians operating today.

Rarely has a band captured the imagination of such a large swath of tastemakers and the public to the point that the typically disparate camps effused and enthused over their return as if they were opposing political parties temporarily agreeing on something. Rarely has a band ever been as outspoken yet essential as this one, and rarely has such a band deigned a small city such as our own worthy of being honored with its presence. As unlikely as a stop in Nashville seems (mostly given their scant history here, having only played The End in 2000 and Cannery in 2005, in addition to a 2003 opening slot for Pearl Jam in Antioch) , Sleater-Kinney seized an opportunity to rip a hole in the fabric of a city that’s becoming increasingly recognized for fostering a healthy and appealing rock scene, in the process redefining the context and significance of what it means to actually “rock.”

I spent much of the past week trying to catch up on their catalog to the best of my ability, taking my time to run through all of their recorded work in chronological order. Having formed in 1994 as the brainchild of the perception-shredding lead vocalist Corin Tucker and the stereotype-crushing axe queen Carrie Brownstein, Sleater-Kinney started out as a side project before morphing into the musical behemoth that it is today. While their self-titled 1995 debut and the following year’s Call The Doctor indicated that Sleater-Kinney were a band with a budding authorial “voice”, it seems (to an amateur like myself) that they didn’t truly know how to shout from the mountaintops until they added drumming virtuoso Janet Weiss prior to the release of their 1997 breakthrough record Dig Me Out.

Though they were often referred to as one of the benchmark figures of the “riot grrrl” movement in the 1990s, Sleater-Kinney mostly existed as cult heroes to a select few, getting their message across only to those willing to subvert the mainstream in their search for realistic role models. However, they were just that up until their reunion this past year: cult heroes. My older sister, having grown up in the era which found Sleater-Kinney making their greatest underground impact, was surprised to find out that they were still making noise to this day. It’s mostly been in their return and subsequent critical reappraisal that they have begun to be properly deified for their contributions. Those that had been patiently awaiting such a moment rejoiced, and with good reason. Personally, I was late to the party, resorting to reddit and the rest of the internet to search for primary sources that illuminated me on the true significance of the boundaries that they shattered the first time around.

To this date, Sleater-Kinney has released eight brilliant and diverse records, each one an accomplishment in its own right. This band obviously meant the world to a devoted fanbase for over a decade before disappearing into the shadows for a period of time that lasted nearly as long. In their first phase, they helped to change the perception of “outsiders” in rock music, but not quite enough. Not quite enough for a grown man to realize that it’s silly to qualify that favorite band is made up of women, and not quite enough for a metropolitan newspaper editor (!) to realize that he can write about a female musician without relying on her appearance as a crutch.

The popular music industry (and a shamefully gullible public) has historically worked to exclude and marginalize anyone that isn’t a cisgender white male, either through ludicrous demonization or active ignorance. In contrast, the prevalence of longform writing about music has assisted in offering alternative perspectives, thus making the way for (previously overlooked) creators like Sleater-Kinney to claim their rightful place as incontrovertible cornerstones of contemporary art.

The concept that we as a society (for the most part) are working to bring the proper credit to our most innovative figures finally brings me to the original intent of this article: a review of Sleater-Kinney’s live show. Though they didn’t satisfy the 1,500-person capacity at Marathon Music Works, Sleater-Kinney nonetheless drew a demographically unique crowd both from Nashville and from around the country (ex. the guy from Arizona sitting next to me at Corsair prior to the show and my friend who came to visit from Florida) in celebration of their unexpected reunion.

Sub Pop labelmates THEESatisfaction fulfilled their role as a quality opening act, forcing a chatty room to let down its guard. Providing a nice contrast to the headlining act, THEESatisfaction specialize in a vibe-drenched and (well choreographed) dancey form of hip hop, taking cues from frequent collaborators (and Third Man acolytes) Shabazz Palaces as much as obvious forebears like Erykah Badu and D’Angelo. Though I’ve found that the sound at Marathon is usually unkind to the opener (and sometimes the headliner), THEESatisfaction managed to win over a good portion of an unfamiliar crowd, a sight that made me only more excited for the main event.

Coming out to a roaring applause promptly at their scheduled 9:15 set time, the Sleater-Kinney touring quartet (the Mount Rushmore of Tucker, Brownstein and Weiss aided by the addition of multi-instrumentalist Katie Harkin) wasted no time wailing out the infectious riffs of “Price Tag”, the opening track of their 2015 comeback record No Cities To Love. Over time, it became apparent that the setlist was built with late adopters like myself in mind, leaning heavily on both the new album and 2005’s The Woods, the proggy masterpiece (and Sub Pop debut) that they released shortly before announcing their hiatus.

Of course, all great performers exhibit the ability to accommodate for their diehards in a manner proportionate to those on the opposite end of fandom, and Sleater-Kinney were glad to indulge those that had accompanied them on their long journey. Though they ignored their first two records by and large (“I Wanna Be Your Joey Ramone”, one of the group’s signature songs, was conspicuously left off the setlist), they mined 1997’s Dig Me Out for massive crowd pleasers in the form of the album’s title track, the wily “Turn It On” and the universal mission statement of rock music, “Words and Guitar.” Still, there was another surprisingly overlooked cut in the form of the breakup anthem “One More Hour”, a Rumours-esque exploration into the friction of creating with a former lover.

As far as the rest of the catalog is concerned, Sleater-Kinney drew sparingly from their middle period, peppering a few songs from 1999’s The Hot Rock, 2000’s All Hands on the Bad One and 2002’s One Beat into the mix before eventually turning their focus back on the past two records, commercial peaks that have financially allowed for them to go on such an extensive tour of the country. They ended both sets with standouts from The Woods, setting up an encore break on the strength of the empathetic and tectonic shifting “Jumpers” and closing out the night with the one-two punch of the warily uplifting shout-along “Modern Girl” and the previously mentioned powerhouse “Dig Me Out”, opting to bypass the lengthy encore segments they’ve been employing at previous stops in favor of a more concise conclusion. The merch table was flooded shortly after the last notes rang out, and it seemed that everyone truly enjoyed themselves.

Though it’s clear that Sleater-Kinney are now as important culturally as they have ever been (ironically due to the original members’ prolificacy during hiatus), it’s also clear that the political messages underlying their music have yet to make their intended and rightful impact. In the nine years between albums, little has changed to allow women a proper and non-discriminatory lane in the discourse surrounding popular music. For every stride for equal representation made by the brilliant minds at ROOKIE and She Shreds, there’s an online commenter threatening to rape a female musician with a cheese grater. The fight that Sleater-Kinney put up the first time around made a dent, but there’s still an alarming amount of work to be done before anything is truly fixed.  It’s a good thing they’re not leaving us any time soon. 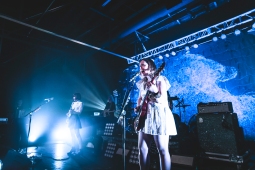 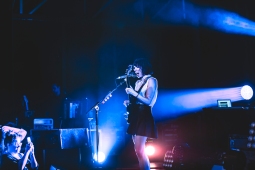 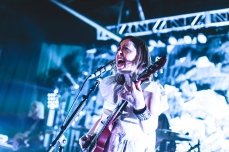 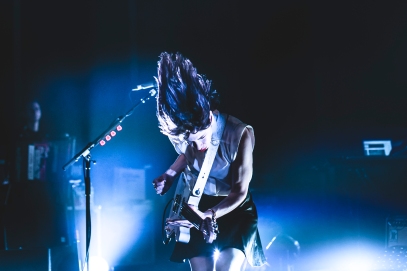 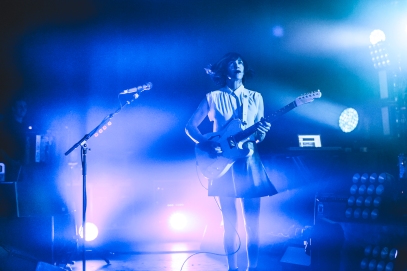 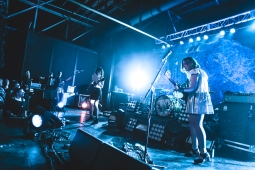