Skip to content
This past Monday, the band played to a sold-out crowd at The Grand Ole Opry, graduating from the Ryman. We sent our photographer Lauren Hanson to capture the evening, and Kevin tells the tale.

It’s hard to recall the exact moment when the Leeds-based rock group alt-J made the leap from bubbling buzz band to a certified “thing”, but it almost seems like it was one of those overnight success stories, the kind that happens when an act receives heaps of Internet exposure and makes halfway decent music.

Their 2012 debut record, An Awesome Wave, broke them through on the strength of windy compositions with silly titles like “Breezeblocks” and “Fitzpleasure”. An Awesome Wave currently sits at a 71/100 on Metacritic, with an 8.4/10 user score. I can remember hearing several of my friends gushing about the record, with a lot of listener feedback pegging these guys as “the next Radiohead.” One of my first Bonnaroo memories comes from sitting down in the field behind This Tent while the band prepared to take the stage for a primetime Thursday night slot. I remember a gradual but massive influx of people surrounding us as their set time approached, the crowd eventually ballooning to one of the densest I’d ever experienced as a concertgoer. 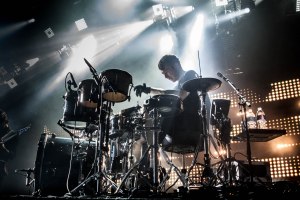 For their 2014 follow-up This Is All Yours, the band decided to continue down the path of making supposedly “difficult” music, though they fell just short of the same response they got for their debut. Sitting at a 70/100 with a 7.3 user score, This Is All Yours seems like the equivalent of an allergic reaction to the aforementioned festival fame and constantly rising expectations. It’s not a good record, but it could be worse.

While alt-J is certainly never going to give Thom Yorke and company a run for their money, there is probably some validity in their initial successes, thriving as a modern rock radio band despite being more challenging than most of what is considered popular these days.

This past Monday, the band played to a sold-out crowd at The Grand Ole Opry, graduating from the sold-out Ryman show they played back in September 2013. We sent our photographer Lauren Hanson to capture the evening.