Skip to content
Kevin ponders the local relevance - and national draw - of our ever burgeoning rock scene via our favorite weekend of music and mayhem, Freakin' Weekend.

It’s been a long winter. We all know it, and the prevalence of weather-related small talk has been inescapable for several months now. However, the light at the end of this unreasonably cold tunnel was spotted at Exit/In for two nights last week by yours truly. And if the sixth installment of the Nashville’s Dead-curated Freakin’ Weekend was any indicator, it’s gonna be an (insert fire emoji here) summer for Music City.

Being still relatively new to town, I have found myself most quickly enamored with Nashville’s rock scene. The first piece I ever wrote for this website was a review of Bully’s ground-scorching debut EP and PUJOL’s poetically unhinged (and VICE approved) power-punk odyssey Kludge grew to become one of my favorite albums of 2014 in any genre. I’ve spent many a night off scoping out four-band bills at The End or existing as one of the folded-armed senior citizens at an all-ages house show, observing the pit from a safe distance. Sometimes, like in the case of Diarrhea Planet’s year-ending shredfest, I find myself losing a beanie and not knowing where I left my jacket. 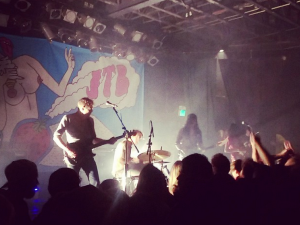 While singer-songwriters are making the migration to Nashville en masse, it blows my mind that a similar diaspora has not occurred with musicians that prefer their guitars electric. From Freakin’ Weekend headliners JEFF The Brotherhood and Those Darlins all the way down the line to promising fresh faces like Slanted and Gunther Doug, Music City seems to have built an especially inviting and well-networked infrastructure for rock n’ roll in all its shapes and sizes.

This was apparent on the first night’s lineup, composed of equal parts Nashville torchbearers and diverse touring acts. From the constantly improving New York expats/spazzy Infinity Cats in Music Band (the first music band that I ever saw in town, during their late July opening gig for DP) to the vibe purveyors in Natural Child and the country-indebted (and current Alabama Shakes opening act) Promised Land Sound, some of the best players on the #SQUAD laid the groundwork for the visiting teams. Seattle surf-rockers La Luz played a fast and loose (but painfully short) set on their way to SXSW. If I had one complaint about Nashville so far, it’s the lack of a true-blue surf act and hopefully some of the musically adept types in the crowd for La Luz made a similar note. Memphian hardcore punkers Ex-Cult injected a propulsive burst of energy into the affairs while also providing one of the few examples of a lead singer on a Nashville stage exclusively wielding a microphone as their primary instrument. I left before Arizona noise outfit Destruction Unit took the stage for the last set of the night, but I heard from Daddy Issues bassist Jenna Mitchell the next day that the band’s frontman was so deep in the clutches of an unknown substance that he eventually fell off the stage. I had that report later confirmed by Destruction Unit fan Charlie Shea, who is also a member of MELK, a band of recent transplants looking to break into the scene. Charlie told me that his band played a Murfreesboro house the very next night, a gig in which he adopted his own gravity-battling technique by playing most of the show laying on the floor.

The idea that embracing stage antics to that extreme might seem silly at first glance, but it’s indicative of what I’ve observed about how these musicians feed off of each other as a way of upping the ante. The scene itself owes a lot to the sense of community cultivated at events like Freakin’ Weekend, where positive-minded (and often inebriated) folks mingle in the name of barreling relentlessly through the early stages of tinnitus and the chance to innovate new crowdsurfing techniques. A prime example of an “Only in Nashville” moment from JEFF’s Saturday night set: two of the underaged upstarts in JAWWS forgoing social niceties and simply just walking along the outstretched hands of the front “rows” at separate moments in the evening. I’ve also never attended a show where a man dressed in a king’s robe and crown threw an entire bag of Warheads in my general direction, shortly before releasing a slew of bouncy balls that would continue to make their way through the crowd as the night progressed. Amazingly enough, I didn’t wake up the next morning wondering why one of them was in the pocket of my jeans.

I did, however, wake up on Friday morning with a renewed sense of vigor for the coming months. While the heavy hitters are hitting heavier than ever (JEFF is joining Mumford and Sons on their traveling festival, Diarrhea Planet is probably only going to continue gaining acolytes and Bully seems destined for a big Pitchfork bump), the smaller names are certainly putting their best foot forward in a mission to make this maybe the coolest city in the nation to be a fan of this certain breed of rock music. I say “maybe” cautiously here, because it’s a disputable notion that’s suspiciously timed, given the bacchanalia of SXSW in what many would argue is the current Mecca for such a scene. However, I’m also confident that many of the out-of-town revelers down in Central Texas are going to find a new favorite band, and that band is going to be from Middle Tennessee.

Case in point: I was scrolling through my Instagram feed last night and saw two nearly identical posts of the same band at a venue called Maggie Mae’s.

One was a photo from This City’s Full founder Jake Giles-Netter, from whom I (regrettably) had to turn down an offer to accompany on his 12-hour road trip to Austin, which means that I’ve already missed Nashville emigrant Natalie Prass’ rave-inducing SXSW debut and Hannibal Buress filling in on drums for Speedy Ortiz.

The other post was a video shot by a friend from Atlanta that had become a big fan of Turbo Fruits when they played in her hometown, so she carved out time in her travel schedule to catch them before she caught her departing flight.

I asked her if she caught PUJOL earlier that night at that same venue. She had. She loved them.

Of course she did.