Skip to content
You might question my sanity and why I think it’s a good thing that I’m thrilled that the most self-aggrandizing figure in contemporary music erupted into yet another petulant outburst at an increasingly irrelevant awards ceremony.

It’s only Tuesday, and the cycle of hot takes about Kanye West’s latest public relations fiasco is still in the “pre-heating” stage at this point. You’re going to be hearing about that post-Grammy’s tirade for at least another month. Sure, it was an idiotic moment, a grasp at something profound by a drunk person with a massively narcissistic mindset. And just like “George Bush doesn’t care about black people” and the Bonnaroo meltdown and “I’mma let you finish” before it, you can feel comfort in the fact that “Beck needs to respect the artistry” is going to provide you with endless fodder for watercooler conversations and barstool arguments until the next seemingly unimportant topic of argument to emerge as a result of something that Kanye West said. 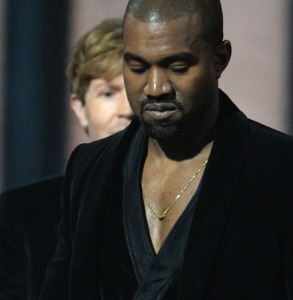 The problem is that nothing Kanye West has done for music in the past 11 years has been unimportant. The even bigger problem is that all of the discourse that comes up each time he trips up in public completely ignores his accomplishments and how sneakily he has embedded himself using controversy as a selling point.

He skewed the landscape of hip-hop irrevocably toward his image with 2004’s The College Dropout and then beat the “sophomore slump” by essentially rewriting the rules of the genre with 2005’s Late Registration. For a brief period leading up to and following 2007’s Graduation, he became the world’s biggest arena pop star shortly after eradicating the much-maligned “gangsta rap” mentality that most common folks had such a hard time grasping.

Then his mother died, so he made 808s & Heartbreak, a left-field experiment in studio manipulation that also made it acceptable for pop musicians to open up about how depressed they are. Then he released My Beautiful Dark Twisted Fantasy, which is the most delightfully unfiltered long-playing record from a bonafide psychopath since Michael Jackson’s Thriller, and whose creation will take up the most square footage in the museum that eventually gets erected long after West is no longer with us.

I can’t really plug in any hyperbolic statements about Yeezus here, because I’m not even sure that I know what to say about it over a year and a half later. It’s divisive, it’s loud. It’s misogynistic, it’s empowering. It’s disturbing, and it’s beautiful. I’ve spoken to many others who feel the same appreciation that I feel toward Kanye, but not towards Yeezus. It’s a hard pill to swallow, but in that sense, it might be the most representative work in his discography.

I’m skipping several important moments in a storied career (maybe the most documented of all time, when you consider how it easy it is to publish something to the internet and how Kanye’s entire story has been contained within The Age of Information), but that quick recap will hopefully help with my argument that Kanye has been using his public persona as a method of drawing relevance to his output as an artist.

I’ve been worried, following the release of the slightly underwhelming “Only One” that Kanye was slipping into a comfortable role as a husband and father, placing his work as a burgeoning fashion designer at the top of his list of priorities. His post-Grammys outburst proved me wrong, and I’m all the more happy for it. You might question my sanity and why I think it’s a good thing that I’m thrilled that the most self-aggrandizing figure in contemporary music erupted into yet another petulant outburst at an increasingly irrelevant awards ceremony. 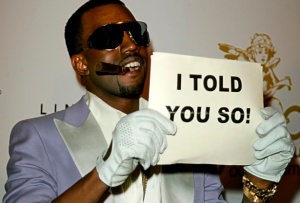 Much like West himself, I’m pretty dead set in my beliefs about his body of work, and there’s nothing at this point that can change those views. What I want you to do, as an independent thinker and as a fan of music, is question why you (or others, not pointing fingers here) think that Kanye deserves the vitriol that has been sustaining the endless cycle of internet bloodthirst for the past few days.

Has Kanye personally offended you? I’ll answer that with a “no, he probably hasn’t.” There’s probably a decent chance that Kanye West has not come up to your door and disgraced your honor on the level that much of the fiery post-Grammy reactions have posited him as doing.

Did he upset the sanctity of The Grammys? I’ll answer that with a “did you see Madonna’s desperate grasp at remodeling herself as an over-the-hill Lady Gaga?” or “did you see an already over-the-hill Lady Gaga attempt to remodel herself as a Las Vegas Strip lounge singer?” The Grammys are bogus, and the same people that overlooked Sam Smith stealing a Tom Petty song because he’s otherwise completely inoffensive are the same ones that crucify Kanye for sampling because he had a few drinks and said something completely ridiculous in an otherwise useless interview for The Kardashian Network (sorry, I meant The “E!” Network).

The bottom line is that Kanye does these things to draw attention to himself, and as we’ve all seen time and time again, it works. Think about how many popular musicians have experienced such a lengthy period of relevance in the modern age. There’s not many names to list, and you can see many career trajectories that have began and finished in the same period that it takes Kanye to release a new album.

Kanye West has constantly positioned himself as a social pariah in order to spotlight what he’s done as a very private musician. It comes across (justifiably) as childish that he continues to do shit like this, but do you really think that he hasn’t noticed the attention that it brings him? Kanye’s ambitions have long outreached the scope of the general public and will always continue to do so, but he’s been an expert at harnessing negative opinions since the beginning of his career. If you look back at the history of truly “important” musicians in the history of pop music, all of them have used their inherent controversy to bring the focus to their work.

The only difference between Kanye West and Elvis Presley is that Kanye had the sheer bad luck to exist in the age of immediate gratification. It’s almost certain that the same people that despise Kanye for interrupting Taylor Swift at an MTV awards ceremony are cut from the same cloth as those that disowned Dylan for going electric half a century ago. The predictability of public outrage in popular music never changes, just the minute details. I’ve spent an inordinate amount of my own life defending this opinion, feeling safe that the course of time will eventually vindicate all that Kanye has accomplished. Until that moment comes, we should all just take a step back and cherish that we still have someone that makes us all care enough about music to argue about it, whether you agree or not.