We prepare for music salvation courtesy of Danny's gospel-by-way-of-punk roots,

Growing up in a Catholic family, the rituals and traditions of going to church on Sundays and doing 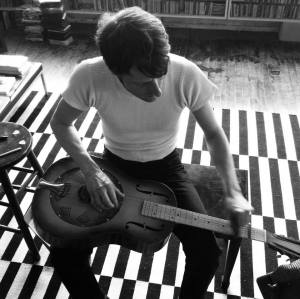 overtime on holidays and special occasions like First Communion and Confirmation were just that–traditions. I vaguely remember the excitement of putting on my mom’s hand-me-down First Communion dress that felt white and princess-y almost but in reality just made me look like a cupcake. And of course, who could forget the hours of praying. I remember as a little kid saying a variation of prayers at night before going to sleep–usually starting out with the classic, “Now I lay me down to sleep, I pray the Lord my soul to keep..” A poetic verse of tradition learned at age 6, yet something I haven’t really appreciated ’til I got a listen to Danny Kroha‘s Angels Watching Over Me.

Danny Kroha, best known for being a founding member, singer/guitarist of Detroit’s thrash garage blues trio The Gories, has been in more bands than you can count before inevitably falling into a Google black hole (The Demolition Doll Rods, Danny and the Darleans to get you started). It’s been nearly three decades since he crashed into the Detroit music scene along with Mick Collins and Peggy O’Neill as the influential band that took the spitting attitude of punk back a few decades into bluesy rock territory both reinventing and creating a genre that shook up the late 80s/early 90s spurring a chain reaction of imitators to claim the credit.

These days Kroha backtracks into blues and is doing all the work. Releasing his first full-length solo album under Third Man, Angels Watching Over Me, includes 15 semi-repurposed classic gospel tracks and one original folk composition (“Run Little Children”) that fits in with the like, reinventing himself and the genre yet again. Danny has since expanded his experience with various instruments for this album that’s actually been in the works for over four years now in his hometown. In dabbling in the banjo, baritone dulcimer, diddley bow, washtub bass, jug and mouth organ, it’s evident that he wanted this album done right–and by all means he succeeded in creating something classic. Danny’s voice takes familiar lyrics from age-old southern gospel prayer and serves it up like fresh fruit to be had and enjoyed. From the opening strumming of the title track, “Angels Watching Over Me” to the last few lines, the time-honored prayer lives on with a new audience.

Did I mention the show tonight at The Basement is FREE? Save those dollars for some sweet, sweet limited edition colored vinyl of Danny’s LP that will leave your fellow record collectors green with envy…if you catch my drift. So get to steppin’ and head over to 8th Ave when the doors open at 8:30 PM tonight to catch Danny Kroha along with Sun Seeker and Dean Jackson. | 21+ |