“I have plans for next year that I think will surprise some people. I want to take the opportunity I’ve been given and really do something special with it.” But before the anticipation builds for the coming year, go hear James Vincent McMorrow and all of his different sounds tonight at Mercy Lounge. 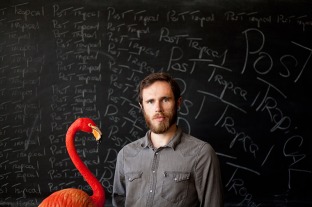 The first time I heard James Vincent McMorrow was on a gifted mix CD that found its home in the player of my 1994 Volvo for most of that year’s winter months. “This Old Dark Machine,” a song from his first album, Early In The Morning, was the fourth track, and during my evening drives home, I twisted the dial back to listen to it on repeat, harmonizing to the chorus while winding with the roads. Having been whisked away by the calm nature and suspended beauty of his voice and melodies, his most recent release, Post Tropical, debuted an evolved and sublime sound that contrasted his first album and pleasantly surprised my listening experience. Creating a resounding image with electronic tones, hip-hop inspiration, brass sections, and his distinct falsetto, James Vincent McMorrow reestablished his identity in a genre-bending manner and one that can be experienced live tonight at Mercy Lounge.

“Everything that’s happened to me has happened slowly and deliberately,” commented McMorrow. The Irish-born performer detailed to us that the first album was made rather simply. “I had songs I believed in that needed to come out somehow, so I went and made it in the only way I could at the time…I would have loved it to sound bigger and clearer, but then it’s all part of some plan.” At that time the plan included an 11-track album with a much more folk-driven echo that went platinum and set a precedent and songwriting standard that was later met in Post Tropical, just with a much different resonance. The 2014 release is a compilation of elements, wonderfully complicated by McMorrow’s attention to detail. He described the stylistic evolution from his first album to the most recent as “very organic and inevitable.” “With Post Tropical, the internal conversation by that point had shifted towards really pushing myself sonically, where with the first record there was definitely a fear to be bold. With the last record, it was a matter of making exactly what I heard in my head.”

McMorrow heard a spectrum of sounds and inspirations, drawing on his influences to write songs and create tracks that reflected his musical style. “It’s soul music, at its core. I’ve always tried to push it as much as I can, rather than just be a guy getting by on the strength of his voice. I love the depth and intricacy of electronic music; I love emotional songwriting; I love the leanness and brilliance of hip-hop and hip-hop production. All of those things have a foot in what I do.” While piecing together snippets of songs with abstract thoughts, McMorrow celebrates spontaneity with a range of songs, especially focusing on the cadency of his music. “Rhythm’s always been at the core of everything I’ve done musically, and I loved the idea of doing something vital like controlling the beat.” From the consuming and elemental title track, to the sparkling and mystic nature of “Gold,” to the benediction of “Outside, Digging,” Post Tropical’s panorama of sounds and emotions transports you through sonically and emotionally charged songs that provide a listening experience unlike one you’ve had before.

“I have plans for next year that I think will surprise some people. I want to take the opportunity I’ve been given and really do something special with it.” But before the anticipation builds for the coming year, go hear James Vincent McMorrow and all of his different sounds tonight at Mercy Lounge. And check out the Post Tropical trailer to prep yourself for the audible journey.