Skip to content
We chat with Sam Lewis, who you can catch with Chris Stapleton this Friday at 3rd and Lindsley for an artistically indulgent Halloween show. 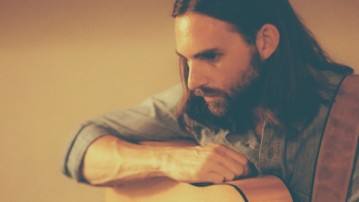 He turned 30 on an Amtrak train leaving from Richmond, VA, and bound for D.C. with a recently submitted resignation from a ten-year stint at Walmart and a familiarity to traveling that made the two-week Atlantic tour comforting. That was about a year ago, and since then Sam Lewis’s take on a musical career has only proven itself a destined result made possible by his charming vocals and his iconic lyricism. As I listened to him play at the 5 Spot, I was met with an appreciated standard of musical integrity and an evident audible religion of old country, folk, and soul that is perpetuated through simplistic chord changes and clear poetry. “The threads are there, you might not be able to pinpoint them, but they’re there,” he says, and he’s woven an audible experience as endearing as it is talented.

We were both early for our conversation, and I was greeted with a bright ‘good morning, darling’ and a radiating kindness, something that is also evident and felt when he’s on stage. As I listened to Lewis talk through a North Carolina accent speckled with other Southern dialects and influences, it became clear to me that beyond his talent and commitment to his art, there is an unwavering trust in his creativity. He is a product of moving around while growing up, and because of his transitional childhood, the state of Tennessee, and even more so, the city of Nashville, has offered him a home for the most consecutive years of his life. “I think that I’ve either intentionally or unintentionally created a family here and with people who are coming from all different parts of life. And music is the heartbeat of it.” Like many of the greats, Lewis began around age nine with a $75 acoustic guitar and an inclination for cover songs. Cycling through phases of rock and punk and country and blues, the storytellers and their songs got the best of him. “What they were doing was sonically very simple. A lot of easy chord progressions and arrangements. But what they were saying was quite amazing.” Hooked by Bob Dylan and Townes Van Zandt and baited through lyricism, Lewis indulged in reinventing standards with friends until he came to the realization that he could create his own.

“To this day I don’t know if he was joking or not, but my friend said, ‘man, why don’t we just write our own songs?’ And I don’t think it ever really dawned on me to do that until that moment. It was like a floodgate that just opened up.” And today a self-titled debut album and a recently recorded second album with an anticipated early Spring 2015 release have poured out. Since his initial release in 2012, Lewis has been touring and writing, creating a repertoire that is strictly his own. He signed to Brash Music in August and shortly after entered Southern Ground Studios in Nashville to record his second album live in a mere two days. “We kept a couple of the first takes, that’s the magic part of this thing.” And with the help of some of the best musicians, the product is a 12-song album with the same threads of his go-to “greats” fused in way uniquely his own. As we talked longer, his melodic speech gave insight into the artistry of this forthcoming musical exhibit, and in his own words, “I wish I could just call it country,” an apt reflection of tradition and simplicity.

Kenny Vaughan once described Lewis’s music as when “John Prine meets Bill Withers,” and it would be an easy task to compare him to the musical translators of the American story and soundtrack. But he has invented a style that takes the irony out of Americana and replaces it with actual experience and narration, emulating the transparent traditions of classic country and folk while personifying emotions through music in an unforgettable manner.

Catch Sam Lewis with Chris Stapleton this Friday at 3rd and Lindsley for an artistically indulgent Halloween show.