Don't be anywhere else besides the Stone Fox tonight for this luxuriously-locked band along with Heaven's Jail and Them Vibes. 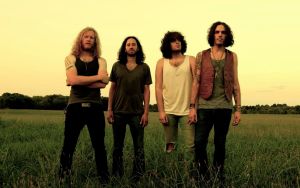 Hair has been a quintessential rock ‘n’ roll attribute for as long (ha!) as I can remember. From mohawks to mullets, from bleached out to buzzcuts, the signature hairstyles musicians choose to sport says a lot about their attitude and image whether intentional or not. Elvis had his pompadour, The Stones had shags, and 80s hair metal bands were practically renamed after all the boys in the band rocked sky-high teased hair. Although the guys of The Cunning have only been a band together for a little over a year, their rock ‘n’ roll locks are already well in sync with one another. And from what I can tell, these guys are shaping up to be a signature staple in the Nashville music scene. Formed in the summer of 2013, the magnetic rock sound of The Cunning has been a long time coming with each member drawing inspiration from various legends such as Rage Against the Machine, Nirvana, and Fleetwood Mac to collectively produce a sound that appeals to a fan of each. Eclectic bluesy rock + four southern boys with mad hair envy = continuation of  good ol’ fashioned rock and roll.

One of the greatest qualities about musicians here in Nashville is that they almost always have some boasting to do about their peers maintaining a communal support system and allowing the music scene to truly thrive. Check out the kind words one of the guys had for his fellow Nashvillians below, as well as their brand new music video for their single, “Lonesome No More.” Oh, and of course come see them live at our Lockeland Springsteen Presents showcase at The Stone Fox tonight!

By Charlie from The Cunning:::

One of the best things about living in Nashville is the amazing local music scene. You don’t have to look hard to find talented bands and artists but for our “Nashville Five” we decided to narrow it down to a few of our favorites.

These guys are bad ass. We’ve been fans of ATW since they initially released their album “Lightning at the Door” last year. Monster riffs, classic tones, psychedelia and nasty slide-guitar is all here. If they’re playing in Nashville you’ll likely find at least one of us flinging our hair around in the front row.

We’ve been pals with Guthrie and his band for a while now and it has been so much fun watching these youngsters continue to write amazing songs one after another. They’re by far one of the most entertaining live bands in town and if you haven’t seen them play yet, you should try and catch one of their shows. Seriously.

It’s funny that in spite of living in a country-music town finding authentic, old-time country is such a treat. Derek Hoke is one of the prime examples. His record “Waiting All Night” is full of killer songs and it would be nearly impossible to get tired of hearing him sing. He and his band perform every Tuesday night a few blocks from our house in East Nashville at The 5 Spot for 2 bucks.

These dudes can play. For real. They’ve been known to perform with a bigger band live but at the core of JKO is 3 dudes who totally shred their instruments. Justin in particular is a very exciting lead guitarist well versed in the language of Jimi and Stevie Ray. Also, Ralph Steadman does their artwork… pretty sweet.

RayLand is a songwriter’s songwriter. Sometimes lyrics just jump out to you and his tales of love and longing are heartbreakingly beautiful. His last LP “Feathers and Fishhooks” is a favorite and it’s hard to not be captivated by his story telling and breezy, care-free attitude towards all things.