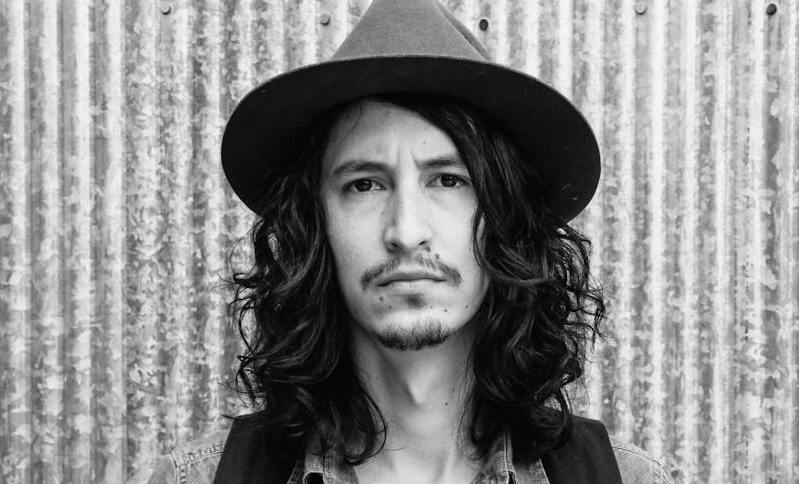 The East Nashville musician shares his favorite musical buddies with us, from Rayland Baxter to the Brothers Osborne.

My first glimpse of Jacob Thomas Jr. was the striking picture on the cover of his debut album. He is casually saddled on the back of a beautiful white horse, reigns in hand, looking incredibly natural–so natural that I almost failed to notice the equally beautiful girl posted alongside. There’s something so regal and mysterious about a man on a horse. Perhaps because it’s such a rare sighting today aside from western films and country music videos. I think I’m also smitten by it simply because it makes me think of a particular picture of Stevie Nicks, someone who I could imagine being friends with Thomas himself.

His debut album Original Sin outlines the heavier issues in life, a strong drink in hand, without sparing any feelings. Thomas and his acoustic guitar alone manage to play a pretty tune with some less than heartfelt lyrics that might cause question of his character, but applaud his honesty. Although there are several sweet tracks on the album like “What I Meant to Say” and “Only Love,” it’s his lack of sugar-coating the salty bits with a melancholic voice that really stand out as both revealing and refreshing. In the second track, “Bored With You,” Thomas ends the tell-off song with these words, “And who do you think you are / to walk into my favorite bar like everything’s alright /  When you knew I’d be drinking here tonight.” But if that’s not your style, try not to swoon over the moon for Thomas’ duet with Lily Costner covering a slowed, somber version of Fleetwood Mac’s “Go Your Own Way.”

If Thomas looks more than familiar, it’s possible you may have caught him performing during his month-long residency at The 5 Spot last month. The singer-songwriter hails from Lafayette, Louisiana where he spent a great deal of time in the church as a pastor. After a falling out due to his frequent performances and time spent at local bars, Thomas made the move to Nashville to pursue his music career–bars and all. “I found more sense of community in bars than during my time in the church. I’ve found that bars are more accepting, and in a bar you can be more honest about the shit in your life,” said Thomas. It seems the folk singer has found a comfortable home here in Nashville and has met a slew of talented compadres along the way.

I’ve lived in Nashville for roughly 6 and 1/2 years now. Relationships & close friendships are the most important thing in the world to me. One of the difficult parts of having a career in music can be the inability to invest in & maintain important relationships because of hectic touring schedules & career demands. I’ve found it easier to maintain relationships with the friends that I have who do what I do (more or less). They understand that just because I may not call or text or meet them at the bar every night doesn’t mean I wouldn’t be there for them if they called me from jail at 4 a.m. I’m also an incredibly competitive person, & having friends who are constantly creating new & original art is something that motivates me on a regular basis & keeps me focused. Make no mistake, I could make a list a mile long of great buddies that I’ve shared good times with. This is a list of 5 good friends (in the music business) who live in Nashville, that I’ve met here in town, who challenge me & who I root for. If you know of these people, I encourage you to support them. If you don’t know of these people, you’d better ask somebody.

1. Rayland Baxter– I met Rayland outside of The 5 Spot (my favorite bar) about 5 years ago. I think the 1st time we met, Ray was looking for another writer to go on the road with him for a month playing songs in Colorado. I didn’t have much going on at the time so I went with him. We shared one of the more memorable months of my life playing songs in small mining towns around Colorado. I’m not exactly sure how, but we made it back in one piece. Rayland is a good buddy & someone whose musical opinion I value greatly. He’s also one of my favorite Artists in this city.

2. Will Morgan Holland– As I write this I’m starting to realize that most of these stories begin with a drunk night at The 5 Spot. I’d been in Nashville for a few months & I saw Will & his brother Josiah, who were in a band called The Lonely Hearts, perform at the 5er. I instantly connected with his writing. Will is one of those freakishly creative people who seem to float effortlessly from songwriter to film maker to photographer to artist. His better half is the amazingly talented designer Amanda Valentine. Together they comprise this sort of creative supergroup. They live a few blocks from me on the eastside & they don’t know this, but in the mornings, I make a cup of coffee, stroll over to their house, sit outside of their bedroom window with a note pad & write down the ideas that they discard.

3. The Brothers Osborne– I met John & T.J. at Exit/In through two mutual friends, Rayland Baxter & Eric Masse. Rayland, The Bros, James Farrell & I were put on a bill together about 4 and 1/2 years ago. I didn’t really know any of these guys other than Rayland very well. These two fine fellows are two of the nicest and most talented people in Country music. The fact that they are now beginning to receive some of the respect that they deserve with the release of their undeniably catchy single “Rum”, only confirms my theory of success in the music business. If you are talented, hard working & nice, It’s only a matter of time.

4. Randy Montana– I’ve been on the road in some form or fashion since i was 15, but I can honestly say that I cut my Nashville touring teeth with this man. I was new in town & just looking to get some sort of non-restaurant based income. I got a call to go out as a multi-instrumentalist to play with Randy. I wasn’t sure how I felt about playing with a label country artist who was doing music that was on country radio. I wasn’t even really sure how I felt about modern day country music in general. As I began to learn Randy’s music I was really shocked. His voice, the writing, the Jay Joyce production…..  It was what country music should be. It wasn’t hokey, the songs weren’t the same used up drinking stories. It was real shit. I still listen to Randy’s record and I still love it. I’ve been lucky enough to do some writing with Randy, we still play music together & we’ve become good friends. Once country radio gets over it’s infatuation with Hip-Hop & frat boys, Randy Montana will rule the music business.

5. J. Alan Morant– I’ve known this talented man for many years now. We both grew up in South Louisiana. As he began to achieve success in the music industry, he relocated from Louisiana to Nashville. When I decided that I wanted to leave Louisiana, I called J. Alan Morant. He encouraged me to move to Nashville, and I can honestly say that if it wasn’t for him, I don’t know that I’d still be here. He’s an amazingly talented composer, writer, performer & producer. I’ve had the privilege of listening to most of his upcoming record. It’s flat out baller. J. Alan Morant has been someone who has constantly pushed me creatively. He’s been honest with me personally. I’ve never technically had an older brother, but Jason fills that spot in my life, so naturally I had to move to Nashville to be around him.