Skip to content
Euphoria, nostalgia, mourning - these are the types of real love and pain that can be felt in Alva Leigh’s debut album Modern Love Songs. 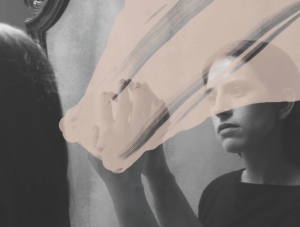 Love is changing. No longer is it a mere sum of dates and declarations of true adoration, and it certainly isn’t like the movies I’m guilty of watching with a bottle of wine and a box of Triscuits. Romance stories like The Notebook paint cruelly unrealistic portrayals of what love should look like. That perhaps a strapping Ryan Gosling lookalike will build you a dream house and say that he wrote you everyday for a year and proclaim, “It still isn’t over!” during a dramatic downpour. There are countless songs and films about the ridiculously high highs and the low lows of love, but what about the details of reality? The moments when it is unclear of whether or not one should admit defeat and give up, or realize some things are worth fighting for in the long run. The euphoria, nostalgia, the mourning of the loss of a loved one or relationship, even the loss of familiarity–like leaving home for a new city to fall for–are the types of real love and pain that can be felt in Alva Leigh’s debut album Modern Love Songs.

So what makes a love song modern in an age where nothing is in black and white? I took this question to the lady Leigh herself who’s single of the same name [“Modern Love Song”] asks just that. “It’s a song about staying in love. It’s about sticking it out even when the odds are stacked against you and staying put when everything else around you is moving.”

Although she recorded the album in her hometown of Nashville, Leigh wrote many of the songs during her first year in London, where she now calls home. “The distance from Nashville actually gave me the courage to be more exploratory in my writing. The pressure I put on myself [in Nashville] to succeed and perform in a certain way was diluted and something shook loose in me,” said Leigh. Whatever that was, it worked out well for the singer who’s irresistible piano melodies and vocal range hold a likeness to Regina Spektor and remain consistently catchy from the beginning with “Modern Love Song.”

The well-crafted pop single sets the steady pace for the album that’s both uplifting and melancholic–much like the ups and downs of real relationships and life in general. “To me, love is all about respect. But people aren’t perfect – I know I don’t always choose kindness in every situation,” admits Leigh,“but the magic comes with compatibility, friendship and I kinda think – age!” Some of Leigh’s softer tracks like, “Somewhere” and “Devotion” showcase the beauty and maturity of a timeless voice that allude she’s definitely lived (and loved) a little.

Naturally, songwriting inspiration derives from personal experiences, some of which are tough matters for the heart. But it’s those painful songs that hold the weight with visceral lyrics–something Leigh especially excels with. “I never thought that my heart could break in the same place again / My scar is stinging with the salt of that same ocean,” sings a haunted Leigh on the final track of the album. “It was the first time I wrote about my father’s death (‘Salt of the Same Ocean’) which was a very cathartic experience. I wrote about heavy stuff – missing home, failed relationships but I also wrote more playful love songs which was a big challenge for me.” Leigh conquered that challenge and that of making several sad songs not sound too somber. In “Breakers of Our Own Hearts,” a song Leigh admits she sings to herself sometimes as encouragement, she questions why we stand in the way of our own happiness and urges to break the rules we make for ourselves. “For me, admitting it was the first step. I have to give myself permission to ignore the sensible voice in my head and say ‘let’s do this.'”

Leigh’s clever debut effort captures the warm effervescent voice of an artist who beautifully covers a wide range of emotions that relate to the new modern lover–not someone stuck on the couch glued to fabled fantasies (even if he does bear a resemblance to Ryan Gosling).

“Is it destiny or is it doom?” Modern Love Songs should be the soundtrack as you figure it all out.