Our bets this year are on Maren Morris: a young Texan who melds pop, country and folk with skill, attitude and songwriting chops. 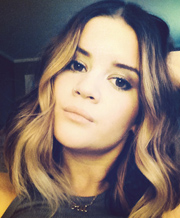 It was March of two years ago when we first reported on Kacey Musgraves: playing Tin Pan after a standing ovation at her CRS debut, she traded songs in a “Fools Circle” round with collaborators Brandy Clark, Luke Laird and Shane McAnally. Tin Pan isn’t exactly about breaking artists, per se, but it’s a nice side effect – singers can prove their chops both vocally and lyrically, breaking into Music Row with a bang and a whimper. Around a year later, I sat down with Kacey at Gojo restaurant, where we shared a platter of Ethiopian lentils and other vegetable dishes, picking at Injera bread, talking about songwriting and weed and Willie Nelson. She was just about to head to Europe with Lady Antebellum, watching country radio flex its ever-rigid fingers to allow spins of her boundary-pushing songs. We chatted a little about what it might be like to be famous and recognizable one day: here, in the near-empty restaurant, the waiters knew who she was simply because she’d been a frequent patron. That was all about to change.

Who would be next? This year, our bets are on Maren Morris: a young Texan (now Nashvillian) who got her start when she barely cracked the double-digit age group, Maren’s a strong pop-country writer and a keenly refined singer with both youthful inflection and steadfast, shit-kicking grit. With twangy breaks and skillful acrobatics, she’s more Patty Griffin to Kacey’s John Prine, often trading matter-of-fact delivery for earnest folk wares.

But she can kick it into high gear, too, making songs that could cross the tight border patrol of country radio while keeping her roots intact – the track I keep getting stuck on is “Loose Change,” an upbeat pop-country number with smart lyrics (“loose change, I ain’t worth a thing to you/loose, change, you don’t see my value”)  – she vacillates from early Sheryl Crow-swing to gritty Bonnie Raitt trails, sliding southernized vowels along a swinging piano riff. It’s instantly catchy, just naughty enough (who ya callin’ “loose”?) and cleanly produced with instrumentation that’s both classic and unexpected.  Lookout, Gojo waiters. Listen here.