Skip to content
Blended from influences of pop, jazz, a fifties swoon the sounds of Daniel Ellsworth & The Great Lakes are born through the mind, but turned universal. 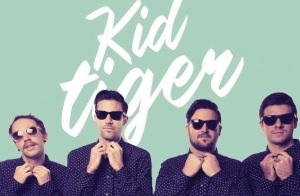 I recently caught “Sun Goes Out,” the new single from Daniel Ellsworth And The Great Lakes, half-way through its radio airtime. It possessed the kinetic energy of a track that builds on the softer beginnings of a composition, prods gently at its basic anatomy, and finally opens up, exploding in keyboard-coated synchronicity.  On this particular day, the song augmented my positivity, softly running through the background of my sun-streaked car, reaching an instrumental apex that fell in perfect synchronicity with my sense of highway liberation.

Two days later, on a rainier day in Nashville, I caught this song again, and without my pleading, it made itself malleable to my sadness, exemplifying those moments of pervasive sadness that come with “getting older everyday,” and driving through relationships and situations, watching them crumble, watching time check itself out into the dark.

What I’ve always loved most about music is its duality. There are certain sounds whose frequencies hit us in the way a substance would, gently prodding at whatever mood we’ve elected to possess on any given day.  For me, Daniel Ellsworth and The Great Lakes are the token-band of this mood-amplification.

Formed in 2010, Daniel Ellsworth and The Great Lakes have been on both a Nashville and national radar since their onset of their first album, “Civilized Man.” They possessed an easy sense of cohesiveness and character, one distinct enough to recognize that the collective voice of their singles belonged to them. To create music with such a confident signature is key to a band’s early success, and to relay it with insurmountable energy in live shows is paramount to its consistency. Their danceable, synth-pop passion is what has put them at the forefront of today’s indie-pop map, having had their songs featured in television shows, commercials, and steadily ranked as one of the best knew bands you should be listening to.

It is said that to be an artist, one must float between lines of introversion and extroversion, existing equally in the world of external experience, and within the confines of their own mind, where creativity takes up its initial root. The music of Daniel Ellsworth And The Great Lakes epitomizes this concept; the songs center around lyrical introspection and outgoing instrumentals. Blended from influences of pop, jazz, a fifties swoon, and the chugging beats of earnest rock, the sounds of Daniel Ellsworth And The Great Lakes are born through the mind, but turned outward into an experience that is universal and energetic. Their live shows make the most introverted of us the wildest dancers in the crowd.

I’ve found myself drawn to their newest album, Kid Tiger (available for streaming on Spotify now), the way that one becomes drawn to music that exists in a territory just above simplistic emotion; it is a collection of songs evocative of the rising hope and melancholies of modern-day rumination. The new album builds upon the sounds of Civilized Man, with an even greater level of maturation in compositional structure. Produced by Vance Powell, (Jack White, The White Stripes), the collection of songs on this album pronounce a great level of confidence and collaboration than we’ve previously seen with the band, yet remain equally dark and danceable.  The album is set to be released March 4, and extensive touring will follow in support of its inception.

Watch the video for “Sun Goes Out” here, and catch the album release party on March 8 at Exit/In with Alanna Royale and Blank Range.