Skip to content
Local singer-songwriter Christiana Benton heads to Exit/In to spend time with mewithoutYou - and indulge her youth. 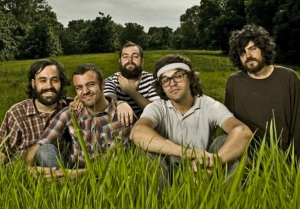 I was fifteen, sitting in the back of a friend’s car on the way to Stroudsburg, Pennsylvania when the handsome 18-year-old with a beard in the passenger seat turned around and asked me, “Is mewithoutYou your favorite band?” I hesitantly replied “No”, to which he responded with a simple and direct, “they should be.”

I was immediately hooked.

I started listening to the Philadelphia natives on a semi-regular basis until every riff and lyric became embedded into my teenage experience. What I didn’t realize at fifteen was that such eager attempts to impress my peers with an underground taste in music would end up shaping the course of my life. Now, ten years later, everything that was once a plea for attention has become a genuine, unwavering affection for artists who seemingly overstep the “boundaries.”

Having released five full-length albums since 2002 and a couple of EP’s beforehand, mewithoutYou’s sound has ranged anywhere from thunderous post-hardcore to storytelling folk-rock and seems to have landed somewhere in between. Their band-members have remained consistent (a rarity these days), with Aaron Weiss leading the way singing, speaking, and screaming lyrical content that cuts through the audience like a sharp blade. Line after line of spiritual imagery and raw sincerity pairs itself with roaring guitars and drums that would tempt any self-restrained onlooker (even in Nashville) to let go and move their body along with it. If you’ve ever found yourself drowning in existential thought, or you’d like to, then this is the band for you.

“After years with a crown on my head I’ve grown overfed, unconcerned, and comfortably numb kept busy

indulging in pleasures of the wealthy

(Someone make me afraid of what I’ve become!)

At the first sign of possible trouble I turned my heels and ran (Oh, I’ll never learn),

My life is a cup of sugar I borrowed before time began and forgot to return.”

Last week’s show at Exit/In was yet another unforgettable experience seeing the band perform live. Besides being especially impressed with co-headliners, Touché Amore, and getting into a sold-out show courtesy of Lockland Springsteen (thanks, guys!), mewithoutYou’s set was both captivating and eccentric. It’s refreshing to see a band having a good time with each other on stage, exhibited by bassist, Greg Jehanian and drummer, Richard Mazzotta performing subtle interpretive hand motions toward each other during one of the slower acoustic songs. Even after a decade of performing together, their chemistry and playfulness balances out the weightiness of their material. In between songs, they exhibit gratefulness, not entitlement, for having an audience. I’ve rarely seen a set that didn’t result in the entire venue resounding in unison.

Maybe it’s nostalgia combined with a love of all things melancholy, but aside from a few songs on their album “It’s All Crazy, It’s All False” that I failed to wrap my head around, mewithoutYou has never disappointed me. Were I introduced to them now, I may not have given them the time of day because I rarely default on anything heavy, but thankfully, I was once a fifteen year old with something to prove, and as a result, mewithoutYou proved themselves to be steadily brilliant artists.