Music discovery and community as it should be with the UK-based initiative and record label, now growing firm roots in Nashville. 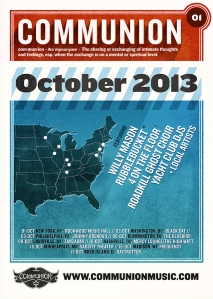 This Communion doesn’t always take place in a church, but it is a religious experience.

Formed in London in 2006 by musicians Ben Lovett (Mumford & Sons), Kevin Jones (Bear’s Den) and producer Ian Grimble (Manic Street Preachers, Travis, Beautiful South), these amazingly curated nights of music (which have now expanded stateside beyond just here, NYC and LA) have also found a special home in Nashville. Our local Communion’s stage has been graced by the likes of Jessie Baylin, Sturgill Simpson, Tennis, Gil Landry (of Old Crow Medicine Show), Robert Ellis and Shovels & Rope.  It has launched careers here and abroad, giving voice to both undiscovered acts and established gems, and a chance for, well, musical communion and brotherhood (or sisterhood) amongst artists. They’ve since branched out to form Communion Records, whose roster includes Gotye, Ben Howard, Michael Kiwanuka, Daughter, and many more.

Tomorrow night (10/10) Communion Presents once again hits Nashville, with Rubblebucket, Willy Mason, Roadkill Ghost Choir, T Hardy Morris, Steelism and Shaunna Tucket & Eye Candy (at the High Watt/Mercy Lounge), and will continue on Thursdays beginning again in November (the second one of the month, to be exact). This go-around, a set lineup is embarking on the tour, with local artists added at each stop.

I love things that reinvent the community of music and take music discovery back to the stage where it belongs – not relegated to the internet and blogs (yes, I realize we are a blog and therefore this is a slight insult to ourselves. This is more than fine.). Communion does this elegantly; with tireless spirit and both an international flair and boots to the ground locally; it’s as keyed-in to what sounds smart both in London and Nashville or wherever it touches, digging deep and wide.

So in the spirit of Communion, we asked Ben Lovett and his gang to list their top five Communion moments, which we are very pleased to bring you here…

“One of my favourite memories dates back 6 years ago pretty much to the month, at the London Club Night. Kev and I had booked one of the most exciting unsigned bands on the circuit at the time, called Peggy Sue & The Pirates and they were due to play 3rd on a bill of 6. The room was busy really early and the atmosphere was electric. We’d facilitated this moment, we’d brought together these people under that roof. It was incredible, I think Justin Young (from the Vaccines) had played 2nd on and then Peggy Sue came on and everyone just stopped still, all focus and attention came to their songs, and what was even more incredible was that everyone sat down where they were, almost spontaneously and without direction.

It’s hard to appreciate the absurdity of this communal action without knowing the venue. These floors were sticky, concrete, smelly floors, that I’d never seen anyone sit on let alone 180 people. Silence and attention during the songs and then bursts of applause and exuberance between. We’d seen this band play other venues, and this had never happened before, so it felt truly unique to Communion and an experience everyone shared in that moment in time, something that can never be bought or sold; or lost or gained, just a ‘you should’ve been there’ moment that we strive for time and time again at Communion events. For me, that’s what makes it all worth it.”

“My favourite would have to be the first ever club night we put on, simply because, in hindsight if I’d had known how far the adventure would take us my mind would have been blown.”

“So many to choose from, but my personal favourite Communion moment happened at home this summer – hearing Catfish and the Bottlemen‘s second single ‘Rango’ debut on Radio 1 as Zane Lowe’s “Hottest Record in the World” this summer. An incredible band, at the start of their career, getting a very big nod that they richly deserved. I think the reason it particularly sticks out is that I had become a father a couple of weeks before, and when the song came on I danced around the living room with my son in my arms and a big smile on my face.”

“Yikes. I have several:

“I think it’s hard to pin a specific moment that sticks firmly in my mind as most memorable in Communion history as there have been so many. I think I’d have to choose March 18 2012, standing outside 1305 E. 4th Street, Austin, Texas.

I’m given a key to a 1974 VW Campervan and told that I’ll be driving 5,000 miles to Boston alongside 5 other campervans as part of our Austin to Boston tour featuring Ben Howard, The Staves, Nathaniel Rateliff and Bear’s Den.

I remember struggling to get the campervan into gear, but I had The Staves singing to me as all 6 campervans drove into the night.”