Boom Forest's sound sets out to harmonize the thrusts of increasing technology with the flow of nature's inborn cycles. 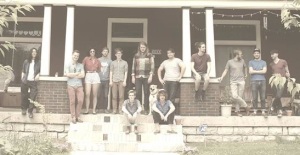 There are certain sounds that scribe our identities; we gravitate towards the kind of music that unravels the elemental building blocks of our characters. As an airy person whose existence is mostly conjured inside a thrilling, albeit fantastical imagination, I am drawn toward the celestial; I appreciate music that mirrors atmospheric imagery. All good music induces synesthesia. I happen to be fondest of the sounds that compel me toward visuals of nature, allowing me an aerial headspace that looks toward the landscapes below.

Boom Forest is the personal project of John Paul Roney, the long-haired occasional live bandmate of Foreign Fields. Its sound sets out to harmonize the thrusts of increasing technology with the flow of nature’s inborn cycles. In doing so, Roney succeeds in transmuting the mundane to the spiritual, reaching an apex that appeals to my own identity. There is a rare human quality in which someone, seemingly effortlessly, balances their intellect with their intuition; when these points intersect, masterful artwork is born. John Paul Roney is one of these individuals, and Boom Forest is the wonderfully emotive result.

The music video for Boom Forest’s “Baby Teeth” leaves us in high anticipation for the record release. Produced by the supremely talented Wisconsin-based group PHOX, the video superimposes images of golden plains, green forestry, and childhood recollections against the profile of Roney’s impassioned musicianship. The three-minute long take moves in rhythmic synchronicity with the song’s impressionistic story telling, culminating in a storm built through the reminiscence of a selective and nostalgic memory. Roney’s voice is pristine in its purity and sweetness in pitch; a lack of frills testify to the flexibility of his vocal range. Against the rumbling of an acoustic guitar and the invocation of nature’s sounds, it is a voice that crystallizes the song’s sentiment, a flow of clear water traveling across the hills of crescendoing emotion.

Watch the music video below, and be sure to check back here for more Boom Forest updates, as we will undoubtedly be chronicling the project’s evolution.

Baby Teeth by Boom Forest from Elder on Vimeo.