VITEK, capturing our attention with an indelible charisma and a sound that infuses jazz and soul, bound together by a tangible pop underscore. 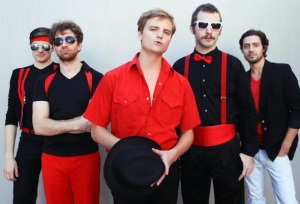 When I first saw VITEK live, they captured my attention with an indelible charisma, and a sound that infuses jazz and soul, bound together by a tangible pop underscore. The band takes the more ethereal moments, similar to the prismatic sounds of a Kid A track, and grounds them through keyboard lines and meticulous harmonies.

Their single, “Sunbird” quickly became a favorite of mine; its a cappella introduction showcases a vocal meditation, ascending into a bass and keyboard conversation that mimics the natural aesthetics that the song title evokes. An upbeat brass section accompanies the song’s circular sound; should I be looking for a unique composition to raise my energy-level and banish the thrust of a debilitating ego, this would be it.

As unique as their sound is VITEK’s Nashville Five; below is a list that should be hanging on any one of our refrigerators as an extension of a city bucket-list. I’ll be tuning into 89.5 more often now, if only to find out ways to emulate Bob Parloche’s lifestyle. It also makes me wants to befriend the members of the band; much like their music, this list challenges you to step outside the boundaries of convention.

Robert “Bob” Parloche ::: Most nights at least one VITEK member will be tuning in to 89.5 in order to listen to one of the finest Jazz radio hosts to ever live.  It’s delightful when you first become acquainted with Bob’s voice, immediately trying to conjure up what this stud must look/be like.  Initially you might think he’s well into a fifth of bourbon and certainly on his 30th cigarette of the day, but soon you realize that at 75 years of age it’d be hard (outside of Hunter S Thompson) to retain such a lifestyle on the daily.  Bob will enlighten your spirit with his quirky and seemingly unnecessary (but totally necessary) detailed commentary on the history of each track and its players.  Not to mention his choices are mind-blowing and you’ll likely never find a lot of them on your own accord.

Sand Volleyball “Taking it to the Sand” ::: It’s long-standing VITEK tradition! Among the countless random ventures while touring, a sand volleyball court in the middle of any city park holds a precedent.  Between intense games, we take our responsible hydration breaks typically reaching the moment when you don’t quite know whether battle the B.O. and look for a shower or sprawl out and embrace it.  “Back to the sand” was quickly coined as a mainstay slogan, and can be of use to clarify it’s time for game 3 or it’s time to take the stage….seriously we were supposed to be on 5 minutes ago.

Guitar Shaped Pool ::: Is it illegal? Absolutely.  Will you be prosecuted?  Chances are decent.

This doesn’t stop VITEK nor does it stop countless other violators who can’t resist shredding a lap in a warm-as-urine pool, all while shredding a Van Halen-esque slide down its guitar neck shaped shallow end.  No sense in wearing a bathing suit when there is minimal lighting involved.  So dust off the dingles, and dive headfirst into the ‘guitar pool’ just off music row.

Barbara’s Home Cooking ::: Everyone is a “sweetheart” at Barbs.  As for the employees, are they German? Polish? Dutch?… who cares, because they are the nicest humans on earth after Jesus up and ascended. This historic home-turned-restaurant serves up everything a hungry musician could want: 3 generations of chefs, genuine southern dishes like Poppyseed Chicken and Pineapple Casserole, and bottomless baskets of the best yeast rolls you’ll ever have. EVER.

Ft. Houston ::: Want to know how to build a house, or sew a wedding dress?  You can observe and learn these very skills and much more from the fine folks of Fort Houston, Nashville’s artists and craftsmen breeding ground!  At the Fort you’ll find everything from surf bums remodelling Volkswagens for upcoming documentaries, to lumberjacks ornamenting their latest timber, to hot dancing babes swinging from the ceiling in silk hammocks.  Sounds like paradise to any VITEK member, but when skateboarding from the poster design room, through the open warehouse to the mechanic’s shop, and then through the office space, we realize that we’re better off sticking to our instruments, leaving the crafts to the pros.