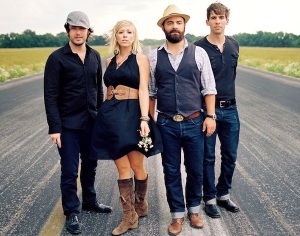 Here are some things you might not know about Drew Holcomb: he’s a Tennessee native, speaks French, collects first-edition books and has Masters degree in Divinity from Scotland’s University of St Andrews. He wrote his dissertation on “Springsteen and American Redemptive Imagination.” Springsteen, you say?

And here are some things you might know about Drew Holcomb & the Neighbors: they just released their newest record Good Light, will be playing Bonnaroo and also will appear at Vanderbilt’s Rites of Spring festival.  That their music, rooted in…well…American roots, artfully melds those southern touches with a pop sensibility and palpable power.

They’re more than just neighbors, too, as Drew’s wife, Ellie, is in the band – maybe that’s part of where the warm easiness of their sound comes in, the solid, steadfast beats. Or maybe it’s just pure musical synchronicity. And then there’s the story of Drew’s voice, which is at once round, bold and tender. Listen & purchase their LP’s here.

1. Best Bacon in Nashville: The BLT at Mitchell’s Deli in Inglewood is the finest I’ve ever eaten. Benton’s Bacon, huge cuts of fresh tomatoes on a sourdough hoagie. Yes Please. Runner up. The Bacon Old Fashioned at Patterson House. If you like Bourbon and you like Bacon you have to try this drink.

2. Best Tourist Stop for Locals: Loveless Cafe by the Natchez Trace. The food is every bit as good as people tell you it is. This is where Ellie and I went on our first date before we saw Patty Griffin at the Ryman in 2005. Runner Up. The Bluebird. I have played probably 5 times here in the last decade and there is no place like it in America.

3. Best Place to Cover Your Head: HatWRKS on 8th Ave. Talk to Gigi, the owner. They sell hats for every taste and head. If you work hard at it, you can talk her into making you a custom hat. I have a rabbit Fedora that is my stage staple she made for me.  Runner Up. Goorin Brothers on 2nd Ave. Its a California company that I first went to in LA, and now Nashville has one.

4. Best place to breathe real air: Walking around Radnor Lake is the best way to spend an hour or two in Nashville. Its beautiful, you are likely to see deer, squirrels, an assortment of birds. Take a friend, its a great place for a long phone-less conversation. Runner Up. Riding my motorcycle on the Natchez Trace.

5. Best Weekend Trip in TN outside Nashville: Memphis, TN. I am a fierce advocate and defender of the Bluff City. Stay downtown at the Madison Hotel. Eat BBQ, mainly the dry rub ribs at either Rendezvous or Central BBQ. Go to a Grizzlies game. See a show at the Orpheum. Visit the Stax Museum. Runner Up. Knoxville, TN. Spent four years for college Stay in Market Square at the Oliver Hotel. Eat at Tomato Head. Drink at Downtown Grill and Brewery. See a show at the Bijou or Tennessee theater. Shop Market Square.