A Rambling Ode to Patty Griffin (in anticipation of her forthcoming album American Kid out May 7). 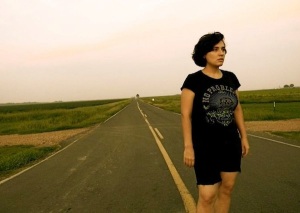 Today’s In Their Own Words brings us Mercy Bell; a recent transplant from New York City who makes folk music with an effortless tone and honest tongue. She takes the pen (well, keyboard anyway) to discuss one of her greatest influences: Patty Griffin.

Make sure to vote for Mercy during Lightning 100’s Music City Mayhem on 4.2 and listen to her record, All Good Cowboys, at the bottom of the piece. And listen to Patty’s new song, “Ohio,” here.

A Rambling Ode to Patty Griffin (in anticipation of her forthcoming album American Kid out May 7) by Mercy Bell :::

I think I moved to Nashville because of Patty Griffin. I have no idea where she lives, she might live on a yacht on the Pacific. But her peers are here: Todd Snider, Buddy and Julie Miller, Emmylou Harris. That’s the scene where I wanted to be.

It seems like Patty is to songwriters what Led Zeppelin is to garage bands. She’s a secret everyone knows about. I’m going to reminisce for a spell and then wrap it up with three lessons.

I first discovered Patty on the Dixie Chicks album “Home”, with “Truth No. 2” and “Top of the World”, which she wrote. When I thought that my mama was going to die, I listened to “Long Ride Home” on a loop in my car driving back and forth from college, until I only heard that song from the off-balance car speakers and only saw the autumnal colors of a New England November.  “Chief” made me speed down back roads a few times during that desperate season. Thankfully my mama is alive and I have stayed a devout fan of Ms. Griffin.

“Up To the Mountain” was the first song I ever played for an audience as a new songwriter. When I first moved to New York City, feeling very radioactive and alive and exquisitely alone, my new friend Sabrina would pour me some wine and convince me to practice the song “Mary” with her in her hippie-tastic apartment in the ghetto of Crown Heights until I forgot that I had any problems. I’d stay too late to get home safely, so I’d sleep over and walk home in the clear winter sunshine down Eastern Parkway listening to the song, which made me cry into my scarf as I ate a bagel. It was a good cry and an average bodega bagel. Brooklyn became home quickly, and I have to thank Patty for getting me through that first winter.

It’s hard to speak for everyone about Griffin’s appeal to them. I’ll speak for myself: she writes melodies that stay with me and I wake up singing in the morning; intrinsically singable. Her “show me, don’t tell me” lyrics, full of verbs and understatements void of cliche, are a punch in the gut.  If you want to know how to write a song, listen to this stuff.

There’s a few anecdotes worth mentioning that I think prove as a lesson. I’m gonna pull my best Ira Glass in trying to relate them all back to a theme.

On self confidence: A lot of people know Patty as a soulful belter. But in an interview with Rachel Maddow in 2007, Patty mentioned that she stopped singing loudly because in 1995 a producer told her “I love it when you don’t sing loud”, and subsequently she “Got a little self conscious about singing loud for a number of years.” SERIOUSLY? CAN YOU BELIEVE THIS? Don’t you automatically feel better about your own self-confidence issues now?

On writing whatever the hell you want: The song “Heavenly Day” from the 2007 album “Children Running Through”  about a stroll in the sunlight is “my very first love song I ever wrote in my life, it’s on this record… I wrote it for my dog.” This woman writes songs about making pies and about Native American factory workers. She wrote a song about a lonely woman at a bar with an “empty apartment and a best friend who’s a queer”. She’s written one love song, about her DOG.

On the universal appeal of truth: My favorite anecdote, though, is a story my friend Jenny Williamson once told me. Jenny travels often, is a professional writer, and our taste in music has a doppelganger effect. She told me once, “I was in Amsterdam’s red light district and I walked by a prostitute’s open doorway and heard “Long Ride Home.” Ya dig?

Read other In Their Own Words Features :::

In Their Own Words /// Dave Cuomo + Chicken Little