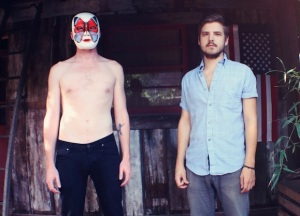 There’s something about Foreign Fields that is hard to shake – a combination of music that is at once soothing and sonically challenging; it’s rich, stirring and haunting, a feeling, not just a band. Now living in Nashville, the band hails originally from Wisconsin, which makes people rather lazily constantly compare them to fellow Badger State inhabitant Justin Vernon. Sure, there are shared influences there, but there’s more to the music than just being pigeonholed as a disciple of Bon Iver. I can get lost in songs like “The River Kings,” with unpredictable structure and loose melody that swirls in your head endlessly; you could be listening to it for hours or minutes, and both would do just fine. Or the effortless meld of folk plucks and rhythmic synth on “Taller,” that makes me want to lay on the grass in the backyard, after three tequilas, and try and squint at the sun…

Having somewhat recently moved to town, we asked Foreign Fields to offer up their own Nashville Five, a five tips for transplant musicians (and everyone else, too).

1. Learn the Mas Tacos menu and timing. Fridays and Saturdays are fish tacos. Every other day are fried avocado tacos. You can’t lose, but both will be a craving in your near future, and heading out to grab fish tacos on a Wednesday won’t cut it.

2. Las Maracas has 32oz (that’s close to 3 beers) Yuengling drafts for $3.50 everyday. And free chips. And if you pony up a few extra dollars for a tip, you might get a Dos Equis for the same price on your second trip.

3. Be aware of the Nashville ‘Neuver for Gallatin. This is the “I’m pulling out, but won’t hit you, I’ll just sit here in the middle of what can qualify as a race track for the public until it’s my time to go”.

4. Stay clear of everything but Robert’s Western World on Broadway. Unless you’re buying a “Nashville” shirt for your Dad.