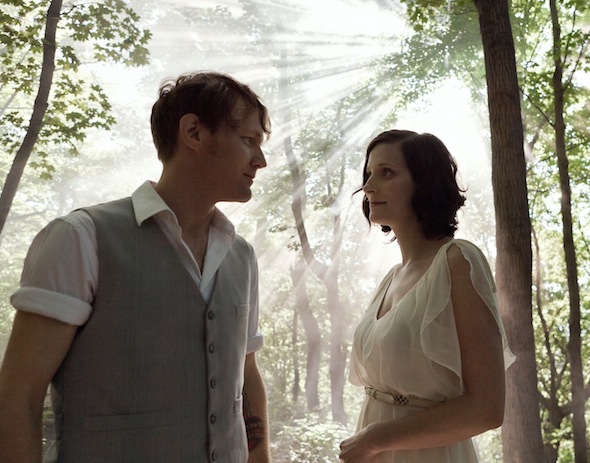 The Canadian duo bring harmonies and quirk (telephones?) to the Basement stage. 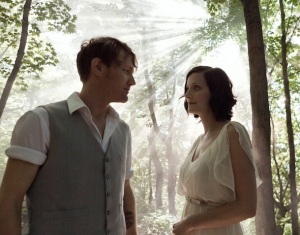 When I walked into the Basement this past Saturday night, I had no idea what I was in for.  I was really excited for the opener, the East Nashville $2 Tuesday king Derek Hoke. However, I could not wait for Whitehorse to take the stage; one because they are a girl/guy duo (those harmonies) and two, because I didn’t know very much about the band and that’s always exciting right? Sort of like a first date except, better.  Way better.

As I was standing in the crowd, awaiting the show’s start, I saw a guy come through the audience from the soundboard in the back and a girl standing in the front of the crowd next to the stage in a pale lilac dress. They jumped on stage and said “we’re Whitehorse.” Who knew? The band opened their set with the pounding “Killing Time is Murder.” The song has such a rocking vibe to it that you couldn’t help but bob your head.  My favorite part about this song (besides the electric guitar that looked like an acoustic) was undoubtedly the lyrics.  When they sang “all is said/all is done/time will waste everyone” it just gave me chills, in the best possible way of course.

The band is made up of Luke Doucet and Melissa McClelland. Both Luke and Melissa had solo careers even after they were married, but then decided to come together as Whitehorse in 2011. After the show I asked Melissa where the name Whitehorse came from and she said they named the band after the city of Whitehorse which is in the Yukon Territory in Canada. The band hails from Hamilton, Ontario so they wanted to keep the band name in the Canadian family as well.

The most interesting thing about the duo is the way they play on stage. In Nashville, there’s a different show every night but I will say that I haven’t seen anything quite like what this band did Saturday night. Have you ever seen a band sing into telephone receivers on stage? And use them as recording devices? I can’t say that I have. These two are truly talented and their use of percussion was impressive as well. On the song ‘No Glamour in the Hammer’ they introduced it as a song about their hometown.  Melissa played bass on the song, which of course was killer. Luke was playing electric and both were alternating singing into their actual mics and telephone receiver recorders. They also used some pots as percussion and recorded them on a loop throughout this song and a lot of their other songs. It seems they just use their surroundings as instruments from the pots or bongos to reverb from their guitars.

On their song ‘Wisconsin’ the two left their mic and telephone recorders behind and stepped to the front of the stage to sing together on a condenser microphone.  The song definitely has a 1950’s rock tone to it brought to you by Luke’s guitar work and Melissa’s gentle songbird like vocals that really soar over the track.  They closed the show with their song ‘Jane’ which also started out by recording percussion and then recording layers and putting them on a loop while the duo sang over them.  Melissa told me they were headed to SXSW and it wasn’t their first time playing, but there were nervous because there’s no sound check and it usually takes them about an hour and half to get everything set up. If their SXSW show is anything like I saw this past Saturday night, I’d say they’ll be just fine.