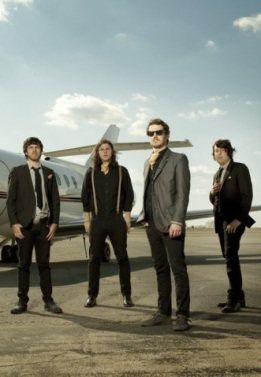 Midway through The Young International’s set last night at the High Watt, lead singer Kaleb Jones doled out some psychoanalysis of our fragile egos: we are too concerned with the clothes we wear and the company we keep, and “the PBR that we drink because we’re fucking hipsters. Break out of it, be free, be yourself,” he shouted. (Jones then noted that he too loves PBR, so don’t fret if this is your beer of choice.)

Rather than take offense, there was a universal roar of hoots and applause, and the audience started dancing (as emphatically as a Nashville crowd can dance) to “More of the Same.” The song highlights the inevitable rut that comes with our daily facades and our attempts to fit into a self-constructed idea of what it means to be “cool.” As a wise woman (Meryl Streep) once said, “the real world is nothing like college. It’s a lot more like high school.” I don’t think there’s any truer statement, and The Young International succeeds in breaking us from the shackles of our conformist tendencies, at least for the duration of their time on stage. They’re normal looking guys in inconspicuous clothing, and their music is similarly liberated from any necessary genre classification. Consider it “pop,” if you must. I’d say it’s just solid.

The set list featured songs from their debut EP, including “Ruckus,” “Shadowboxing,” and “Say Goodbye to the  Sun,” as well as new tracks like the infectious “Days of My Youth” and “Vampire.” The tunes are catchy and bolstered by an instrumental sophistication; combine this with a magnetic charisma, and you can’t help but fall a little bit in love with them (even if they do make you think twice about that PBR you’re holding).

Jones reaches Thom Yorke-like falsettos with ease, bassist David Deaton and drummer Thomas Doeve seem entranced in a rhythmic euphoria, and lead guitarist Chase Gregory delivers guitar lines with stellar precision. If I wasn’t already convinced of their musical chops, the encore confirmed the purity and range of Jones’ voice, leaving you with that, “okay, he was definitely meant to do this” kind of feeling.

I went to the High Watt last night feeling incurably tired. Zero vodka redbulls and one set list later, and I left speeding home, joyous and hopeful and bizarrely upbeat. Even the drunkards outside my apartment complex left me feeling nostalgic rather than pissed, with “Days of My Youth” repeating its chorus through my head.  This is a band whose EP you will want to share with friends, not because it will up your status in hipster-elitism, but because it’s just plain good.