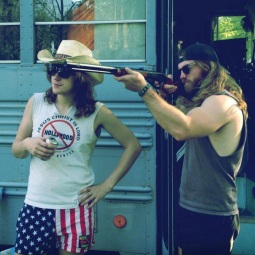 You might know the vintage rock stylings of East Nashville’s Blackfoot Gypsies – the Haight Ashbury-meets-airstream-meets-Jagger’s Camden Town duo just opened for Alabama Shakes’ benefit gig at the 5 Spot – but those across the country might not be getting a chance to get to know these guys any time soon. That’s because their trusty man-van broke down, keeping them off the road indefinitely.

So they’ve launched a Indiegogo campaign to get their wheels back – donate to the band and get a variety of perks: from a limited run of 7-inch multi-colored vinyl singles with never before heard songs, t-shirts or even a private gig, depending on your level of giving. Donate here.

But it wouldn’t be right for these guys to just blandly ask for your money. They’ve made a plea in the form of a pretty funny video, after the jump. Watch, and see if you feel compelled to reach into your pockets :::