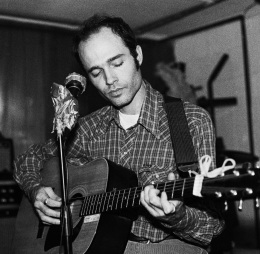 Simon Joyner, the raw, mournful cult prophet of Omaha who sings folk songs with a Lou Reed edge and a hyper-literate, wordy tobacco-tongue, is coming to Nashville on 11.17, playing the Stone Fox with Altered Statesmen. I’m a huge fan – as is Joyner’s more visible disciple, Conor Oberst, so was ecstatic to see his name on the schedule for our newest local venue. He just released a new double LP, Ghosts, his first since 2009. Listen to his song, “Love is Worth Suffering For” here, and watch him play “Medicine Blues” – where he sometimes spits words as well as sings – after the jump.

– The Civil Wars have cancelled their tour, maybe breaking up due to “internal discord and irreconcilable differences.” I have to admit – I recently caught their Austin City Limits performance on the TV, and was left rather…uncomfortable. Though I’d heard these recordings once or twice, when they played covers live- “Billie Jean” and Smashing Pumpkins’ “Disarm” – I felt as if I wanted to tear through the television, shake them and beg them to stop messing with these melodies. “Disarm” was particularly tedious – drawn out, overly dramatic. It almost felt like a Saturday Night Live skit, where Will Ferrell and Ana Gatsayer would play versions of popular songs. So if this break  allows them to shake up their routine and tap into the place that brought the song “Barton Hollow,” then bring it on. If it’s over – best of luck to them both.

– Daytrotter will soon release a Denny & the Jets feature.

– Shelly Colvin is having a record release party tomorrow at Billy Reid in Green Hills.