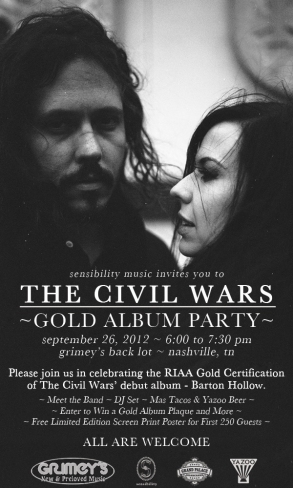 – It seems like just yesterday that I was sitting at Spitzer’s Corner on the Lower East Side of Manhattan, going through a stack of new promos with a fellow music journalist and came upon a nice blue one for a band called the Civil Wars. Though known in Nashville as solo artists, few in the New York scene had really heard of John Paul White or Joy Williams yet. Cut to now, and the Civil Wars’ debut album, Barton Hollow, was just certified gold. So to celebrate, the band is hosting a special “Gold Album Party” at Grimey’s on 9.26 at 6:00 p.m. Why Grimey’s? Well, Barton Hollow is also the best selling album of all time at the store (and you can add me to that list of patrons, since I bought my vinyl copy there). The event is free, open to all and will feature a meet and greet and lots more – see the invite at right.

– The Features have a new video out for their tune “Another One,” that includes some awesome pairs of glasses, among other things. See them play on Halloween at Cannery. The boys are still on the road in support of their 2011 album, Wilderness.

– Support the Lonely H’s Kickstarter campaign to put out their 4th album.

– Beach House is playing Marathon Music Works this Saturday, and I wrote a story on the band.

– Here’s who won at the AMA Awards last night, via American Songwriter.

– Wanda Jackson is so East Nashville – is that Dino’s in this new video for her awesome song “Tore Down,” which was filmed locally and includes many familliar East Nashville faces including Nikki Lane, Jonas Stein and Shane Tutmarc? Well, actually no – it’s Charlie Bobs (thanks commenter). Anyway, watch here: