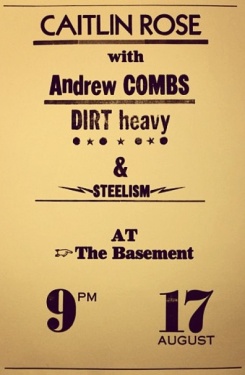 – Caitlin Rose, Andrew Combs and Dirty Heavy have announced a last-minute show this Friday, 8.17, at the Basement. My first thought: damn (my sister, coming to visit Nashville for a few days, is going to miss this great lineup by hair).  My second thought was to add it to my calendar, since all three of these guys are clearly Lockeland Springsteen favorites. Both Rose & Combs have new music out soonish, so perhaps you’ll hear some preview songs. And if you need some more Anglo-culture post-Olympics, you can get your fill via steel guitar player Spencer Cullum Jr. [insert your own gold-medal-pedal pun here]. (<<–  and, that sweet letterpress poster, by Sarah Helen Parker, will be for sale on Friday, too).

– Rayland Baxter has a new video for his tune “The Mtn Song,” which you can watch here. His record, feathers & fishHooks is almost out, so you can wear it out as I’ve been.

– JEFF The Brotherhood and Dan Auerbach made a video which involved drinking & talking, that you can view after the jump.  JTB just announced yet another set of tour dates, none of which include Nashville stops. Don’t fret: there’s a whole window in September for the boys to hit the hometown.