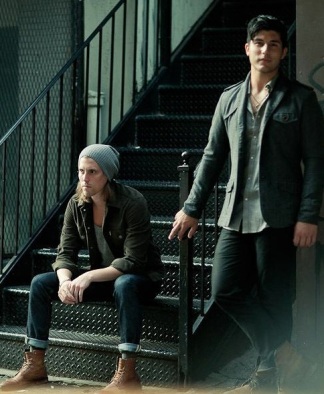 The Nashville duo of Andrew Albert and Dan Smyers (aka Bonaventure) recently released their debut album, Come Hell or High Water on 5.15, and point to acts like Kings of Leon and Tom Petty as reference points. Their emotional, piano-driven tunes often sometimes conjure up The Fray or Lifehouse (like on their song “I Dare You“), but their southern roots shine through on the single “These Shoes,” a soft, Mumford-conjuring thumper whose video showcases the boys hanging on Broadway eating BBQ and checking out boot stores.

Where does Bonaventure go when not on tour? Check out their Nashville Five, which includes some old favorites (some of which the New York Times recently pointed out as well) and a neighborhood favorite, below:

1.  Sam and Zoe’s – Being residents of Berry Hill, we are always over at Sam and Zoe’s. Tucked behind another favorite, Baja Burrito, S+Z’s is one of the best kept secrets in town. Their coffee rivals that of anywhere I’ve ever been, and their sandwiches are killer as well.

2. Gabby’s – There are a few amazing burger spots in town, including Burger Up, Rotier’s, and of course Gabby’s. Gabby’s is the smaller spot directly behind the Sounds stadium that you’ve probably passed a few times here and there, but if you haven’t tried the burgers themselves, you’re missing out. It’s not dissimilar to the vibe of a place like Five Guys, but the food is on a different level entirely. The hours are a little random (11-2 on weekdays and closed on Sunday), but who can resist a delicious greasy burger and fries every once in a while…and did I mention spicy ketchup?

3. Mas Tacos – Having traveled the country a handful of times, I’ve come to find that every region has it’s own “thing”. Texas has its barbecue, New York has its pizza, Philly has it’s cheese steaks….you get the idea. One thing Tennessee is not known for is its Mexican food. But surely enough, Mas Tacos has come and surprised me. The atmosphere is perfectly quaint, generally operating out of a converted Winnebago, and the food is absolutely superb. The cast-iron chicken and Quinoa tacos are to die for, and the Elote (Mexican corn on the cob) completes the whole experience. Top it off with a Mexican Coke and you can’t go wrong. Easily one of my favorite spots in East Nash.

4. Grimey’s – Grimey’s is not only my favorite record store in Nashville, but quite possibly the whole US. The vibe in there is almost tangible. With great artists always coming through and doing in-stores (Edward Sharpe, Mumford and Sons, Mindy Smith) and the best selection of used vinyl I’ve ever seen, Grimey’s top’s the list of my favorite (and most frequented) spots in town.

5. Radnor Lake – If you ever need a place to ‘get away’ for a little while, Radnor Lake is most definitely it. It’s one of the most beautiful and serene places I’ve ever been, and I can’t think of a better place to go to clear your head. There is a trail that wraps around a lake and goes through the woods for a little over 3 miles. I honestly couldn’t recommend this place more to someone coming through Nashville.