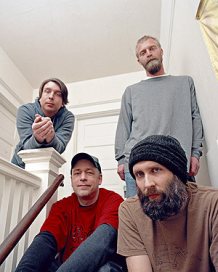 Built to Spill‘s beards may have turned gray, but their influence on modern rock music is as fresh as ever (Modest Mouse thanks them every day). Their record, There’s Nothing Wrong with Love still finds frequent rotation in my house, with “Big Dipper” holding court as an all-time favorite. Come hang with a bunch of grown men and women wistfully recalling their crochet-and-flannel heydays of the 90’s at Exit/In on 9.14, when Built to Spill will play. Yes…?!

The band just announced this extension of their summer tour, molded around the recording of a new album that will be released next year. The Exit/In show is on sale now.

And follow the jump for video of the band playing “Big Dipper” live: