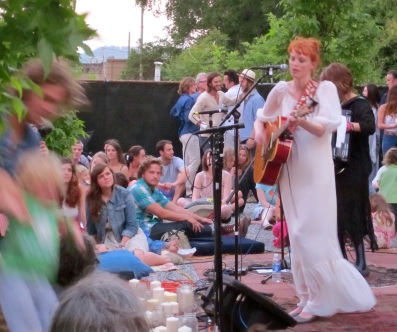 – Last night’s Supper + Song at Imogene + Willie was a fantastic time with beautiful, windy weather and Karen Elson’s artfully crafted tunes. It was a true family affair: throughout the night various little children, including Elson’s, danced in front of the stage and occasionally were corralled in by Brendan Benson and other friends. We could show you more of the mediocre photos snapped with my iPhone, but you’re much, much better off visiting Under the Guise.

– Jonny Corndawg had to part with Spencer Cullum jr. last week and continue his tour sans the Nashvillian/British pedal steel virtuoso. However, he put together a lovely tribute, or shall we say PedalPorn, that you can watch here.

-Half-Nashvillian duo The Civil Wars have asked The Lumineers to join them on the UK/Irish portion of their fall tour. The Denver band is playing this Friday at the Basement with Kopecky Family Band, and unfortunately the show is sold out. But check out a the video for their single, “Ho Hey” here.

– I feel like I’m constantly spewing out Jack White & co. news, but it’s hard not to – there’s so much lately. In today’s installment, Mr. White is going to be scoring his first feature film, The Lone Ranger, and Third Man put together a collection of clips “highlighting the current scene in their home of Nashville,” among other things. And apparently The Atlantic thinks he has a women problem?

– Yet another story about how Nashville is so super cool, written by someone from here but, um, currently living in Brooklyn.

– Wiz Khalifa was busted for weed in Nashville.